Orientation 2019: Everything You Need to Know

Many students may be gone for the summer, but there’s still plenty of activity on campus.

That’s because for the next two months, more than 2,000 fresh faces will be making their way to the College for orientation to begin their next chapters as Cougars. This year, there are 10 two-day sessions for students and their families to get acclimated to CofC, learn more about campus resources – and students, perhaps most importantly, will sign up for their first semester of classes.

“The orientation team is excited to meet the new students and families of CofC23 this summer,” says Director of Orientation Stephanie Auwaerter. “The orientation interns can’t wait to show everyone the great CofC campus and share all their CofC experience with them.”

Orientation always proves an exciting couple of days for new students, but it can also be a little overwhelming. With that in mind, here are some answers to some common orientation questions: 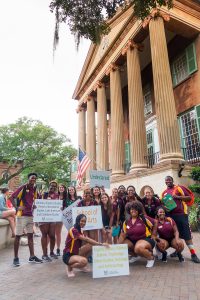 There are 11 orientation sessions between June 17 and Aug. 15, including a special session for members of the College’s Charleston Bridge Program on July 19. Several of the sessions are targeted toward different student communities, including veterans, transfer students and Honors College students. The final orientation session, on Aug. 15 and 16, is reserved for incoming students who live more than 700 miles from campus.

To register for an orientation session, students should log into MyCharleston.

What happens at orientation?

Orientation offers students and their families an opportunity to get familiar with all things CofC before the start of the fall semester. Students meet other incoming students, their academic advisors, and faculty and staff from every corner of the College of Charleston community. It’s also a great opportunity to learn about important College programs and services. And they’ll sign up for their first semester of coursework.

Running concurrently with student orientation programs, an optional family orientation is also a great way for family members to learn about information that may help support their students during their first year on campus. Families can attend sessions on student safety, CofC’s history, financial aid and health services, among other topics. And they’ll even get an in-depth tour of campus. Please note, family members will spend most of both days separate from their students during orientation.

Students are encouraged to check out the Stern Center after the first day of orientation for Orientation After Dark, from 5 p.m. to 7:30 pm. Drop in during that time to be part of video game tournaments, DIY residence hall decorations, win prizes, get a selfie taken in the photo booth, ask an intern questions and more.

Just to note – yes, orientation is required for students.

What do I need to do before I come to orientation?

Students should make sure they’ve paid deposits, applied for housing, familiarized themselves with MyCharleston, completed the math placement test as well as filled out health forms before making their way to campus. A full checklist can be found on the Orientation website. 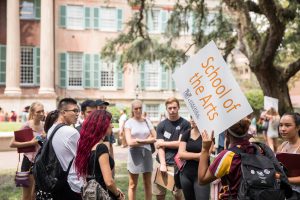 New students in the School of the Arts meet their orientation intern.

Where do I eat during orientation?

If you feel like going Greek, visit Stella’s at 114 Saint Philip St. Owner Steven Niketas ’90 wanted to bring his family’s recipes to Charleston and has everyone talking about the huge portions of lamb frites, dolmades and calamari.

Chef Jeremiah Bacon ’95 opened the kitchen at new American restaurant The Macintosh. The menu draws inspiration from the abundance of Lowcountry produce and products, like a seared wreckfish with rainbow chard and snap beans.

Michael Shemtov ’00 wrote a business plan for a Mellow Mushroom eatery near campus as a final paper for his business coursework. Now, you can benefit from his project with piping hot pizza close to the school.

It’s a bit of a walk from the main campus, but D’Allesandro’s Pizza at the corner of St. Philip and Bogard streets has drawn CofC students in since 2006 with unique toppings and a funky surrounding. Ben D’Allesandro ’05 opened this pizzeria with his brother Nick shortly after graduation.

Where do I stay during orientation?

Students attending the first eight sessions of orientation can have the unique opportunity to stay at a College of Charleston residence hall, but space will be limited. Be sure to reserve orientation housing as soon as possible, and don’t forget to bring bed linens for a twin-extra long bed along with a towel and toiletries.

Students and families not staying on campus are encouraged to stay at any of greater Charleston’s many hotels and other lodging options. Be sure to ask when booking if the business offers special rates to guests attending College of Charleston events.

Can I share my orientation experience on social media?