The air is hot and thick as a group of educators and historians clump together under the moss-draped trees at McLeod Plantation on James Island, a sea island community just south of Charleston, S.C. They listen intently as a tour guide lays out the property’s 168-year history, describing the McLeod family who owned the plantation, the lives of the enslaved African-Americans who labored there, and the evolution of the property during and after Reconstruction.

In the back of their minds, members of the class ponder how this view of Southern history relates to what they’ve learned about the South’s Jewish history, and how Charleston compares to other Southern cities such as Atlanta, New Orleans or Richmond, Virginia. What was it like to be Jewish during the time of slavery? How did the racial, political and cultural climate impact Jewish traditions, businesses and communities across the South?

Illuminating Southern Jewish history within the larger context of the American South was the goal of the College of Charleston Pearlstine/Lipov Center for Southern Jewish Culture’s (CSJC) institute titled “Privilege and Prejudice: Jewish History in the American South.” Funded through a $143,699 grant from the National Endowment for the Humanities, the two-week institute, which ran from May 26, 2019, through June 7, 2019, hosted 25 participants from a range of disciplines, including teachers in higher education (religious studies, Jewish studies, literature), public historians and even a filmmaker. 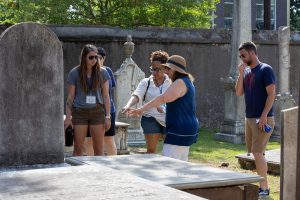 Students of the institute visit the Coming Street Cemetery, one of the oldest Jewish graveyards in the United States. (Photos by Heather Moran)

“We wanted to show how Jewish history can be integrated into our understanding of the South by focusing on creative and place-based pedagogies,” says Shari Rabin, director of the CSJC.

Besides visiting McLeod Plantation, members of the institute toured Kahal Kadosh Beth Elohim synagogue and the Coming Street Cemetery, one of the oldest Jewish graveyards in the United States, and took a walking tour of King Street focusing on Jewish economic life in the early 20th century, among other field trips.

RELATED: Read more about the Center for Southern Jewish Culture’s grant from the National Endowment for the Humanities.

Dale Rosengarten, associate director of the CSJC and the founding director of the College’s Jewish Heritage Collection, says the larger history of the South influenced everything from Southern Jewish cuisine to Jewish Southerners being viewed as white.

“It has to do, certainly, with economics and history – the South’s dependence on agriculture and specifically plantation slavery, which, for example, gave Jews the advantage of white skin privilege,” says Rosengarten. “It also grows out of the Jews’ minority status across the region, making acculturation and ‘protective coloration’ all the more important.”

Rosengarten continues, “Heat, humidity, southern hospitality, the prevalence of treyf [non-kosher] foods in the Southern diet, notably shrimp, crab and pork: All these environmental factors are reflected in the culture.”

Jan Davidson, a historian for the Cape Fear Museum in Wilmington, North Carolina, says putting both worlds in the same sphere of time and space helped her draw a more complex picture of Southern history and the contributions of Jews in the South. 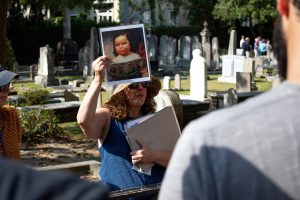 Students of the institute learn about the history of those buried at the Coming Street Cemetery.

“Wilmington has a 19th-century synagogue, and it’s the oldest synagogue in North Carolina, and Wilmington is a port city like Charleston is, and we deal in our museum with the history of enslavement, emancipation, segregation and the gamut of Southern history,” she says. “I felt like this institute was a chance to think through, if we take the Jewish contributions to Southern society seriously, how would that change the stories that our museum tells or that we might tell to students about the history [of Wilmington].”

And that history is often more complex and layered – even within different regions of the South.

“I think there are many Souths. What looks Southern in one place won’t really look Southern in another place,” says Matt Dischinger, a lecturer in literature at Georgia State University in Atlanta. “Charleston is very different from Atlanta is very different from New Orleans is very different from Nashville. Part of what appeals to me about the work that’s being done here in general is that – for me, but also for many of the participants, I think – what we’re getting is a sense of particularity in Charleston. I think one of the things that everybody is going to take away from the institute is maybe a better and more attentive appreciation of how varied and different the South can be, depending on where you are.”

Those are exactly the concepts Rabin and Rosengarten wanted the scholars to leave with.

“We hope that, by gaining knowledge of Southern Jewish history, participants will be able to better understand the South as a region that is more complex and cosmopolitan than typically realized,” says Rabin. “We also hope that an in-depth encounter with Jewish history in a particular place – the Lowcountry – will inspire them to explore the Jewish histories present in their own communities.”

Rosengarten adds, “I see the institute’s role like Johnny Appleseed – sowing the seeds of Southern Jewish history and culture across the nation, giving our scholars the tools to incorporate this overlooked contingent in their curricula.”

Featured image: Students of the institute listen to a tour guide during a visit to McLeod Plantation.