Hard work and horses is all College of Charleston equestrian head coach Natasha V. McCarthy has ever known.

As a self-proclaimed “barn rat,” McCarthy’s early years were spent with her older sister Alexandra Zulia at a local barn in Washington, D.C. From dawn to dusk, they would muck stalls, groom horses and perform any other odd job the barn owners needed done. 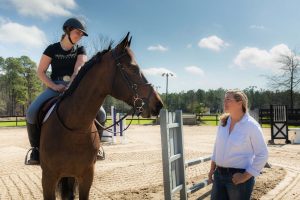 “Out of all the sports and after school activities our mom exposed us to, it was the horses that continually called our name,” McCarthy says. “But, as she was a single parent, we had to work off our lessons and show fees, since she didn’t have the money to keep us both riding year-round.”

The sisters would work for three or four hours in order to earn a 30-minute lesson or riding window. It instilled a sense of responsibility in McCarthy and an appreciation for the fact that opportunities must be earned.

Her riding abilities blossomed, and she enjoyed a decorated junior riding career, which included qualifying for the National Finals.

College wasn’t always on her radar, but she saw the value of education and enrolled at the only college she applied to, Hollins University (then Hollins College) in Roanoke, Virginia.

After graduating from Hollins in 2000, McCarthy spent the next seven years working with some of the nation’s most esteemed equestrian professionals, maintaining and showing horses competitively from Florida to Vermont. She landed in the South Carolina Lowcountry in 2007 when she accepted a position at Tuxbury Farm. She started as a substitute lesson instructor, but quickly assumed more responsibility until she was running the entire operation.

And it was that success that caught College of Charleston Director of Athletics Matt Roberts‘ eye last summer when the College began looking for its next equestrian coach. And in her first year at the helm of CofC’s equestrian team, McCarthy has focused on creating a program built on hard work, respect and responsibility.

“I didn’t want to cultivate an atmosphere with any self-entitlement,” says McCarthy. “Horses don’t know what you’ve accomplished or where you’ve come from. They only know the respect you show them in the present.”

To read the full story on McCarthy’s career in the equestrian arena and her vision for the CofC team, visit cofcsports.com.