Like many great figures who have stood the test of time throughout the course of history, John Kresse and Otto German ’73 will remain icons of the College of Charleston’s rich history. 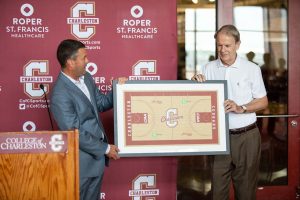 Kresse, the legendary head men’s basketball coach, who led the Cougars to four NCAA Tournament appearances, a 1983 NAIA National Championship title and 560 wins during his 23-year coaching career from 1979 to 2002, will retire after 40 years of service to the College as head coach, administrator, fundraiser and program ambassador.

German, who is also retiring, is in his 46th year of service at his alma mater and 50th overall counting his four years as a men’s basketball letter-winner from 1970 to 1973. An all-conference selection in 1970, he was the second-ever African-American student-athlete to receive a full basketball scholarship at the College. Since 1992, German has overseen NCAA Compliance in the athletics department, but served many different roles on campus including assistant director of financial aid/veterans affairs from 1973 to 1976, associate dean of admissions from 1986 to 1992 and most recently as associate director of athletics/NCAA compliance.

RELATED: Read about Kresse’s induction into the National Collegiate Basketball Hall of Fame.

Members of the College of Charleston community gathered on Wednesday, June 26, 2019, to thank Kresse and German for their service and contributions to CofC during a reception in their honor at the TD Arena McAlister Hospitality Suite. Kresse and German retired at the end of June.

“It has been an honor and a privilege to work alongside Coach Kresse and Otto these past two years,” Director of Athletics Matt Roberts said. “The College of Charleston is a better place because of the positive and profound legacy they leave behind. We will be forever grateful of the indelible impact they have made on CofC student-athletes, staff and alumni for the last 40-plus years.”

Role models, leaders and trailblazers are some of the repeated descriptive words to describe Kresse’s and German’s time at the College. 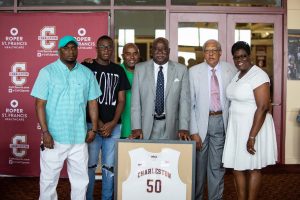 Otto German, surrounded by family, stands with a framed No. 50 jersey, commemorating his 50 years at the College.

“Others know him as a trailblazer, but I have always viewed Otto as a professional who advocates for all students and who encouraged students to be their best,” said Suzette Stille, dean of Admissions at College of Charleston. “He was always willing to share his energy and passion for higher education and advocate strongly for access and diversity. He has often shared his path to the College of Charleston in order to encourage others to have appreciation for their opportunity to be here.”

RELATED: Learn about the Otto B. German ’73 Endowed Alumni Scholarships in Athletics named in German’s honor.

Former student athletic trainer and Director of Sports Medicine Michelle Futrell, who now serves as director of the Center for Academic Performance and Persistence on campus, remembers having to adjust the temperature of the gym by “just two degrees” for Kresse’s practices. It was the small details that resulted in the program’s success.

“Coach will always just be Coach,” she said. “He doesn’t even need a last name. His practices were always planned down to the minute and we rarely deviated from that schedule. His ability to take good players, not superstars, and motivate them to practice and play at a high intensity allowed us to upset many ‘giants’ in his tenure.”

Visit cofcsports.com to read the full story on Kresse’s and German’s legacy at the College.