Exploding Colors: The Science Behind Fireworks

By Alicia Lutz|2020-07-02T11:57:21-04:00July 1, 2019|Academics, Campus Life, Main Feature|Comments Off on Exploding Colors: The Science Behind Fireworks
For privacy reasons YouTube needs your permission to be loaded.
I Accept

Skies across America might be a little darker this Fourth of July, but that doesn’t mean the significance of fireworks doesn’t shine bright. The sense of nostalgia, tradition and American pride that fireworks spark in us is still there, whether we see them this year or not.

There is, after all, a lot more to fireworks than what we see. 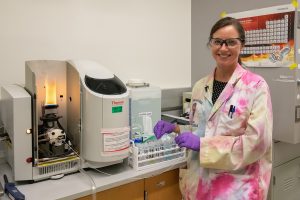 “Not too many people think about the chemistry behind fireworks, but that’s what’s responsible for all the beautiful colors we enjoy every Fourth of July,” says Kate Mullaugh, assistant professor in the College of Charleston Department of Chemistry and Biochemistry. “It all comes down to which element is being used.”

Lithium, for example, lights up a bright pink; iron, a tangerine orange; barium, an electric green; potassium, a soft purple; and sodium, a golden yellow. But how?

“Heat excites the electrons in the atom to higher energy levels,” says Mullaugh, explaining that the higher the heat is, the higher the energy level. “However, the lowest energy ‘ground’ level is preferred, so, upon excitement in the hot flame, atoms will quickly relax back down. But, in doing so, they have to rid themselves of the energy somehow, and they do so by emitting the energy in the form of light.”

If you think of the energy levels as rungs on a ladder, she says, the spaces between the rungs would be where energy is released. So, it is between those “rungs” that we get wavelengths of light.

To demonstrate this phenomenon, Mullaugh feeds various elements into a flame atomic spectrometer in her lab on the second floor of the School of Sciences and Mathematics Building. 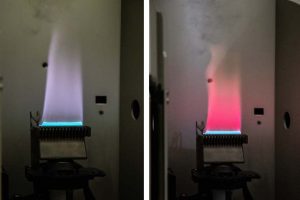 With each element she feeds into the instrument, its flame burns a different color. For example, strontium, magnesium and copper – all commonly used in fireworks – create a respective red, white and blue.

“Blue is the hardest to achieve because it requires a high combustion temperature, so the explosion of the firework has to be really, really hot,” says Mullaugh, who often uses the flame spectrometer with her students in the Fundamentals Analytical Chemistry lab to measure strontium in seawater samples from the South Carolina Aquarium. “Strontium is an essential nutrient for many marine organisms, but is present in much lower concentrations than other things in seawater. So, we can use the strontium’s specific ‘color’ to measure its concentration without interference from other elements in seawater.”

Even to Mullaugh, the colors these elements produce – and the scientific use this occurrence can have – is awe inspiring.

“It is pretty cool that the same phenomenon for creating colors for our pleasure has distinct use in the lab as well,” continues Mullaugh. “Fireworks are a great example of how science and art intersect – and how science brings beauty into our lives.”

Indeed, whether you’re looking at our shining seas or our spacious skies, it’s the chemistry that’s dazzling.