Albert Sottile Had a Real Sense of Theater

It is no great leap to suggest that Albert Sottile, Charleston’s late, great entertainment impresario, understood the value of visual delights. After all, he was known to spare no detail in dreaming up the transporting theaters that were the hallmark of his chief enterprise, Pastime Amusement Company, for which he served as president from its formation in 1908 until his death in 1960.

Imagine, then, the pleasure this celebrated visionary might derive in knowing that eyes will soon light up with another surprise – and one with which he is directly connected. Two large-scale, classically inspired painted murals, which were originally commissioned by Mr. Sottile himself for the Gloria Theatre, are in the process of being restored to their former glory.

The project is part of the scope of renovations now underway at the College of Charleston Sottile Theatre, the former Gloria at the corner of King and George streets that was renamed in Mr. Sottile’s honor in 1987. The refurbishment of the murals has been made possible by the support of the Albert Sottile Foundation, which he first established in the 1940s so he could give college scholarships to the children of his employees. Mr. Sottile’s granddaughters, Joyce Carolyn Long Darby (above, left) and Mary Ellen Long Way (above, right), serve as the foundation’s trustees.

Mr. Sottile oversaw a dazzling stable of properties punctuating downtown Charleston, including the Garden Theatre, the Riviera and the American on King Street; the Arcade on Liberty Street; and the Victory on Society Street. Most showed first-run films, starting with black-and-white blockbusters through Technicolor triumphs like Gone With the Wind, while others also presented touring vaudeville shows.

As a young child of around 5 years of age, Mrs. Way remembers watching her grandfather depart on a chrome bicycle from his home – the yellow namesake Victorian house on campus – to wheel over to King Street. One by one, he would spot-check each venue. Mrs. Way and other family members were regulars at them, as each was given passes to attend all shows with a friend.

Mr. Sottile’s trademark attention to detail was in full measure at his crown jewel, the Gloria, the first theater he fully constructed. When it opened in 1927, the efforts of both he and his architect, C.K. Howell, were confirmed glowingly on the front page of the August 20 edition of The News and Courier.

“The touch of genius seems to have prompted those who designed and supervised the decorations,” the paper reported. “There are rich color effects without gaudiness, deft artistic touches without ostentation, a wealth of painting and statuary without extravagance. Good taste is evident throughout.”

The News & Courier article made note of the grand canvases flanking the walls on either side of the audience seats. “The mural paintings, classical in concept, were done by Italian artists from New York, who executed their work on canvas here,” it states. “One depicts a centaur and nymphs, with an attractive landscape background, and the other suggests music and drama. On either side of these canvases are fine ornamental panels.” 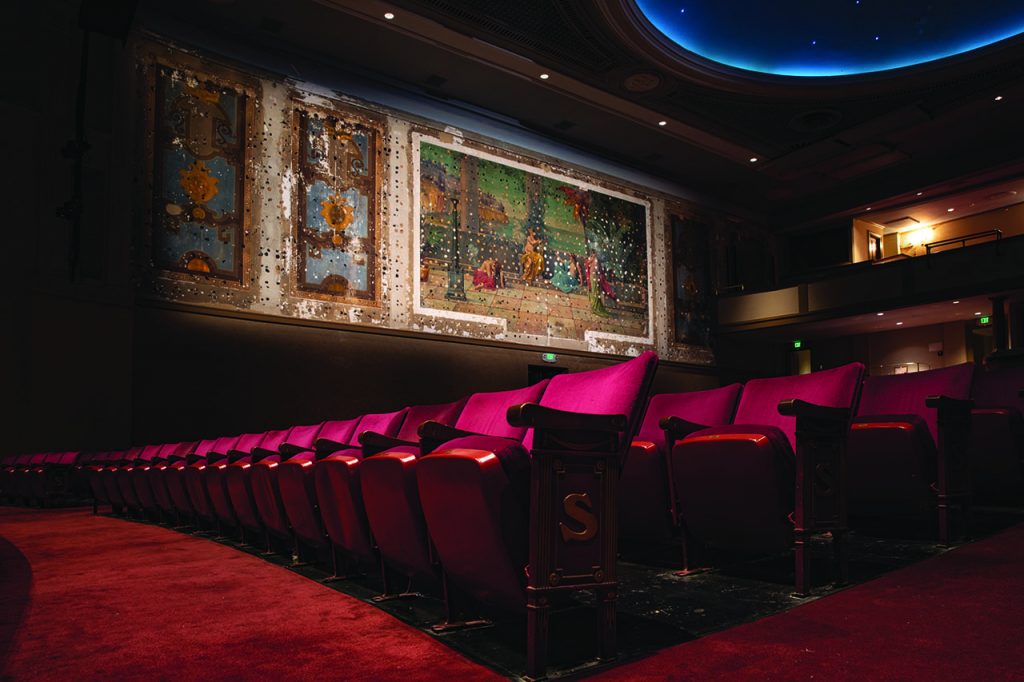 The Sottile Theatre before its renovation. (Photos by Heather Moran)

These were among the Gloria’s many touches, from accents like the elegantly painted S on each row of theater seats to the double mirrors that towered 12 feet each on top of marble stands encased in gold in the foyer. “My sister has one and I have one,” Mrs. Darby says. “That was one of the things, as a 10- or 11-year-old, to all of a sudden you see yourself. It was so much in the chemistry of Papa.”

An Italian immigrant, Mr. Sottile regularly paid tribute to his native Sicily through those details, starting with the theater names – the Gloria, the Riviera, the Majestic and the Victoria, which later became The Victory after the Allies won World War II. At every venue he’d either built or refurbished, there were many other nods to his origins.

During intermission at the Gloria, when the 16-millimeter reels required changing, Mr. Sottile would entertain the crowds by singing Italian songs to them, all accompanied by a grand organ he had imported from Italy that was played by his secretary, Miss Dengate.

The murals also paid tribute to Italy, through sweeping vistas of a Mediterranean seaside peopled with toga-draped muses of the arts. However, well before his granddaughters were old enough to attend the Gloria, the murals had been obscured by acoustic panels, which were eventually removed during a previous renovation.

Now, on the north wall of the theater, a canvas mottled with scores of circular adhesive marks from the acoustic panels quietly rests. Its companion, a similarly riddled canvas that once ran the span of the south wall, was previously taken down, rolled up and tucked away.

Both are currently in the capable hands of art conservator Catherine Rogers. They will again emerge vibrant and whole after she and her team complete their yearlong restoration process. The most colorful component of the ongoing renovations to the Sottile, both in palette and in provenance, will be revealed alongside the state-of-the-art upgrades to the theater’s stage, backstage, basement and theatrical elements. They also represent a significant conservation effort.

“With any new large-scale project, you’re faced with challenges. In this case it was the black tar adhesive to attach the acoustic tiles,” says Ms. Rogers. The circular adhesions that still remain number in the hundreds, and Rogers and her team need to develop special aqueous and solvent mixtures to remove them. For the rolled-up canvas, they are doing most of the work off-site at project partner Craig Crawford’s conservation studio. For the remaining canvas that is secured on Sottile’s north wall, they will need to work atop scaffolding, which adds another dimension of difficulty.

Of course, such efforts would not be achievable without the significant commitment of the Albert Sottile Foundation. “This is conservation of the highest standard,” says Ms. Rogers. “For this family to understand what true preservation is and to give their support is so wonderful.”

Moreover, when the layer of grime has been removed from each canvas, the saturation of colors will appear brighter and more intense, in keeping with Mr. Sottile’s original vision. Now, almost 100 years hence, it promises to be as resplendent a reveal as when he ushered in the first crowds, rendered vivid again by the very man behind the magic.