How did José Chiriboga ’19 find his way starting up an inspired and ethical enterprise? It was through a hole in his jeans. 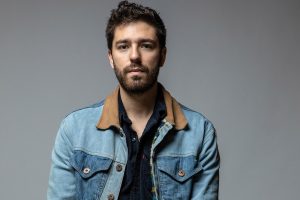 “I was sitting in an ethics class and I looked down and noticed a hole in my pants. I was so annoyed,” says Chiriboga, who rued the prospect of pitching a perfectly good piece of clothing for falling apart in one place. At that moment, he noticed a student sitting in front of him in a jean jacket. A company was born.

That company, REMU APPAREL, employs seamstresses in his native country of Ecuador to fashion upcycled, high-end jackets from denim remnants. By selling jackets sewn from donated fabric that was destined for the dustbin, REMU’s business model represents a novel way to repurpose an article’s durable fabric. What’s more, it does so by employing marginalized women.

“The idea of working with women and empowering them really stuck with me,” says Chiriboga, a computer information systems major who graduated in May. Now, he’s focused on growing his Charleston-based company.

His philanthropic mindset dates back to 2016 and an epiphany he had following a major earthquake on the coast of Ecuador. Far away at the College, Chiriboga was determined to do something for his country, so he started a crowdfunding campaign to raise $1,000 to buy water for residents of the city of Quito, where he was raised.

“The ball started rolling, and I started talking to people who were way too important for me,” he says. “People started mimicking my model, and we joined up.” Chiriboga alone raised $25,000 of a collective $200,000, which funded the rebuilding of an elementary school in the community of El Matal. Chiriboga then began considering other ways to make a positive impact on the country in the aftermath of the disaster.

“The first thing you have to do is reactivate the economy,” he says. He started taking Associate Professor of Entrepreneurship David Hansen’s ecopreneurship courses, devoting a class project to fleshing out his company plan, while at the same time enlisting his cousin and best friend back in Quito to join in the venture.

He found another mentor in School of Business Entrepreneur-in-Residence Stuart Williams and was selected for the Stuart M. Williams Impact Scholarship Program. He was also a member of the winning team for two of the College’s startup competitions, the ENTR 320-pitch, overseen by Hansen, and ENTR 321, overseen by Professor of Entrepreneurial Studies Kelly Shaver. For both, they created the concept of hard-shell cases for surfboards, first by demonstrating the viability of the concept and then by developing the actual business model. 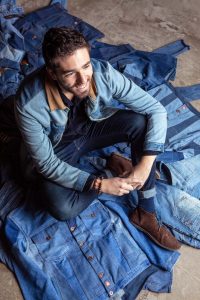 Ever enterprising, Chiriboga also scoured the planet for a sustainable profit model. He spent a summer in Tanzania as a microfinance intern for a British NGO and scanned the internet to source manufacturers, with the goal of developing products to form the base of a socially conscious retail company.

“We started making hammocks,” he says. “We wanted to plant a tree in the Amazon for every hammock that we sold.” Hence came the company’s name, REMU, which means tree in the language of the indigenous Shuar tribe, as well as its logo, which represents the Amazon River. However, the carbon footprint required to produce the hammocks wasn’t squaring with Chiriboga’s business ethos. “I felt super hypocritical,” he says.

Then, there was the fateful class in which his jeans fell apart and it all came together. “I found the solution in fashion,” he says. Though never particularly fashion-focused, he realized that denim looks better and better with age and, as such, hews to a sustainable approach that eschews the disposable “fast fashion” that’s prevalent today. “We’re trying to reduce the waste.”

By doing so, REMU has created a process that renders each piece one of a kind, attracting socially conscious consumers who are drawn to clothes suitable for urban settings as well as for weekend adventures in the great outdoors. That supply and demand is guided by three words: upcycle, empower and explore.

In addition, every jacket bears the name of the woman who made it. When Chiriboga shared this intention with the seamstresses, he recalls, “they were just super happy and started hugging [each other].” One employee relayed that her family was so moved by the attribution that they all started crying.

A growing list of consumers is equally moved to purchase those labels, spanning 36 countries, with top sales coming from the United States and Canada. The phenomenal response has demonstrated something that is in the very fabric of Chiriboga’s worldview. As he sums it up, “You can make money and make a difference.”