Former Professor Is in His Element

For so long, place has been an asset to the College. Its location in one of the most beautiful and historic cities on the East Coast is and has been a true boon to the university. But that was not always the case, especially during the Reconstruction era. At that time, between 1865 and 1877, Charleston was pulling itself out of the rubble left by the Civil War. The city still holds the unenviable record of having endured the longest siege in U.S. history (at nearly two years). During that postwar rebuild, Charleston was, in many ways, an island unto itself, cut off from the rest of the nation and the rest of the world.

However, that didn’t stop the enterprising faculty and students from pressing forward in their pursuit of knowledge after the College reopened in 1866. One of the most significant faculty members of that time was Lewis Gibbes (1810–1894), who taught at the College from 1839 to 1892.

Gibbes, a faculty member who stands in the pantheon of legendary scholars on campus, served primarily as a chemistry professor; however, in true College of Charleston fashion, with its focus on breadth and depth, he also taught mathematics, astronomy, physics and mineralogy. And he contributed scholarship in a variety of these disciplines, such as a study of American Crustacea, his observations of the transit of Mercury in 1845, his research on asteroids, his determination of the longitude between Charleston and Washington, his exploration of yucca juice and his work on the flower portulaca.

But perhaps his greatest achievement is a little-known footnote in the history of chemistry.

As the world celebrates the 150th anniversary of the International Periodic Table of Chemical Elements this year, much focus is on Dmitri Mendeleev, the Russian chemist and inventor who “discovered” the table’s iconic structure in 1869. And Mendeleev truly deserves the credit for his groundbreaking work, which helped provide a common language for scientists around the globe as well as created the Tetris-like framework that has stoked the anxieties of countless non-science majors trying to pass CHEM 101. 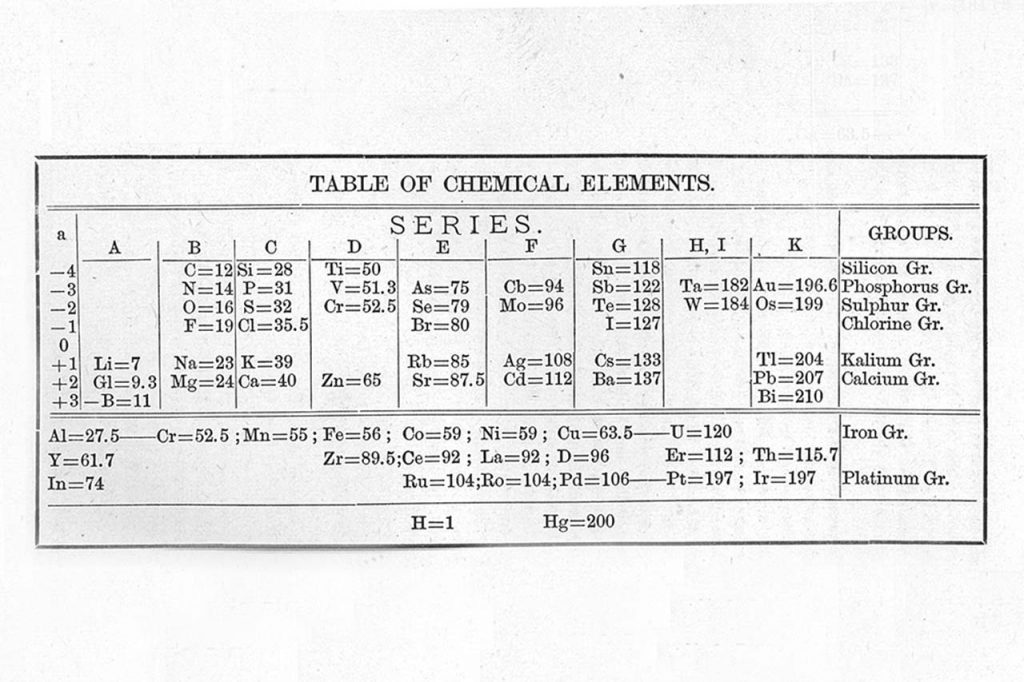 Maybe things would have been a little different if Gibbes, isolated in the Reconstruction South, had been able to bring his “Synoptical Table of the Chemical Elements” to the public sooner.

Like many scientists in the mid-19th century, Gibbes was trying to find the natural grouping of the chemical elements and was seeking the connection between an element’s mass and other properties of atoms. Independently of Mendeleev (and most likely unaware of the work being done in Europe), Gibbes incorporated a new understanding of atomic weight into his reasoning. And he achieved it with his own table, which he published in 1875 in Charleston (the rest of the world saw it eventually in 1886, but Mendeleev’s version had already taken hold). However, it wasn’t until 1941, when Princeton scholar Wendell Taylor wrote a piece in the Journal of Chemical Education praising Gibbes’ little-known work, that the scholar received recognition in the scientific community.

Today’s acknowledgment, while better late than never, of Gibbes’ Synoptical Table (enjoying its 144th anniversary and seen above) reminds us that sometimes there is Au (i.e., gold) to be found in the dustbin of history.