Of course, she’s a pragmatist. She had to be, especially as a high school graduate in 2009, during the height of the Great Recession. The child of parents who stressed financial security and independence, Michelle Iannantuono ’13 had a plan – a very good plan, really: go to college while living at home in Hanahan, S.C. (thus, saving money on room and board), and study something sensible in the sciences, like chemistry, because she’d always been good in that subject and a career in pharmacy seemed like a decent and practical way to make a living.

That was her left-brain thinking – logical, sequential, rational. However, Iannantuono also had a strong right brain, a creative side. Ever since she was 7 years old, she had loved to tell stories. During her adolescence, she would write novels, pen fan fiction and think up wild characters and wilder plots for her friends to act out on camera. But that will never pay the bills, she thought.

Fortunately, the liberal arts and sciences curriculum at the College allowed her to exercise both sides of her brain. As a chemistry major in the Honors College, she was knee deep in labs and research, but her general education courses allowed her to stretch mentally and explore other areas, such as fiction writing and screenwriting.

“I took a variety of artistic classes,” Iannantuono says, “I remember thinking, I can’t wait to get to my religious studies class so I can relax and have fun. I loved those classes, and the professors were great.” 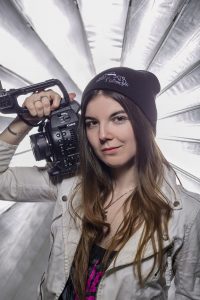 After graduation, she conscientiously followed her “Practical Plan.” She landed a steady job as a dye chemist in North Charleston and dabbled in her writing at night. For a while, it seemed to work perfectly: scientist by day, storyteller by night. “But, after two years, the job was no longer the right fit.” She needed to change up her personal formula, add some new ingredients to her life’s mixture and go after a different reaction.

Always the pragmatist, she tested the idea, slowly. She enjoyed video work (ever since those middle school and high school movies she and her friends made), and started her own business on the side, picking up work after hours: “I did a little of everything, weddings, promotional shoots for local businesses. … I even did a dog training video.”

Eventually the outside work took precedence, and Iannantuono was able to leave the laboratory and devote her full time to Octopunk Media, the production company she founded in 2016. Now, several years later, she’s an experienced indie filmmaker, having shot numerous shorts and her first feature-length movie: Livescream, a horror film inspired by the gaming community and their online shows.

Iannantuono wrote, directed and even programmed the video game at the center of Livescream, which will be more widely released this summer and became the darling of the indie film circuit in late 2018 and early 2019, winning writing, directing and fan jury awards at Nightmares Film Festival, Crimson Screen Festival, Rendezvous Scarefest and Wreak Havoc Film Festival, among many others.

“I like to make movies that are fun and watchable,” Iannantuono observes, “which, in the indie circuit, is often rare. There are many directors that make
self-indulgent art pieces – endurance tests – that can be very difficult to watch. For me, I want people to be immersed
in the plot, to not want to look away from the screen and not want to check their phones.”

Tagged with: 2019 Summer • alumni • chemistry and biochemistry • school of sciences and mathematics