After almost dying on the battlefield in Afghanistan, this student feels like he’s landed in paradise as he attend the College on the GI Bill.

I always knew i wanted to be a marine. I grew up watching the History Channel, seeing all kinds of war movies and looking through my grandpa’s old Korean War stuff. I wanted to be one of those tough guys, and I enlisted right out of high school.

In summer 2008, frying in the South Carolina sun at the Marine Corps Recruit Depot on Parris Island, I graduated and then went to infantry school to become a machine gunner with the 3rd Battalion, 6th Marines. At the time, Iraq was winding down, and all I wanted to do was fight. In 2010, my wish was granted. I arrived in Afghanistan in January, and it was freezing cold. I slept in waterlogged fighting holes at night and shot my way across dope fields during the day. I learned pretty quickly that someone was trying to kill me every day (and some got closer than others).

A couple of months into my deployment, our unit was tasked with investigating a Taliban HQ at a distant village, Marjah. I had never even heard of Marjah before I was sent there, but it was a mess of barking Kalashnikovs and sopping wet opium fields as far as the eye could see. Our destination was a local school, a 5,000-square-foot building made out of solid concrete, with little bits of rusted rebar poking out here and there. The walls were covered in pockmarks from fights, including a chalkboard with a perfect row of holes surrounded by dark, drizzling stains at about the level of a man’s head. The walls were also covered in crude drawings of stick figures with AK-47s shooting down helicopters. They looked like children’s scribbles, but most of them were way too high up on the wall for that. The pictures were better explained by the heroin needles lying around.

Later that day, our platoon split up, with one going out on patrol. Then, the shooting started. The patrol returned to the school – fortunately, no one was hurt. Sitting there, we started to get a little nervous. Not long after, we were showered from every side with machine-gun rounds. I was outside when the fighting started, and it didn’t go well from there. I tried to run through an open area so I could gain a better angle. It seemed clear. It wasn’t.

First, I felt the round hit. It felt like a sledgehammer hitting me in the back. I fell face first onto the ground, breathing in a cloud of dust. I tried to resume the fight, but I realized I couldn’t move my legs. I started flailing and screaming as horribly as you can possibly imagine. When the others saw me on the ground, someone screamed like a banshee for a corpsman – the medic.

Then, a warm feeling poured over me. It seeped through my body armor and pooled down at my legs. When I rolled over to look, I blacked out. I woke up to a cacophony of Marines and Afghan National Army soldiers shooting and screaming out orders. They were dumping mags, chewing through belts and covering my bloody mess with their bodies and trying to drag me behind a corner and out of the kill zone. 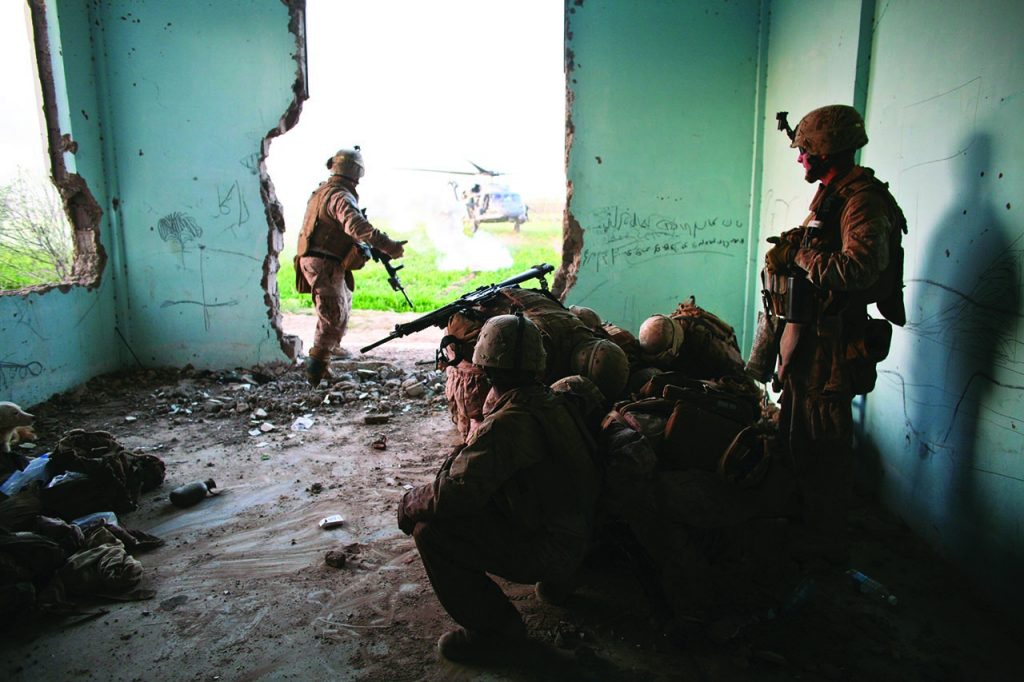 A medevac helicopter arrives within 45 minutes to take the wounded Marine off the battlefield. Smoke marks the landing zone as the aircraft descends onto a poppy field next to the school. (Photos by Drew Brown/Stars and Stripes)

They got me back inside, where the medic became a machine in getting me cleaned and patched up for extraction by helicopter. He started tearing and shearing my sweaty, dirty and blood-drenched cammys off me. The IV and morphine brought me enough ability to cope and come about somewhat. My staff sergeant was laying prone in front of me and talking to me, in order to keep me from blacking out again. He was asking me all kinds of questions: You got a girlfriend? Where are you from? You ready for a sweet ride, McElhinney? Stay with us!!

Here was this man who dragged me through some of the worst field ops that the most elite fighting force in the world has to offer, and every time I struggled or messed up, he was elated. Now, this same man is lying down in front of me. I looked at his dirty face, and I realized that he’s terrified and doing everything in his power to do something, anything. I saw him helping to rip off my uniform, and then I saw his gear turn from that dirty tan to a deep, ominous red. That’s when it really hit me. Someone shot a bullet beneath my back SAPPI plate, through my back, through my pelvis, through my guts and into the wall of my abdomen. The faces around me read that I was probably going to die.

But I didn’t. I lived – thanks to them. I realized, waiting there on that helicopter to drop out of the sky like a meteorite, that I was a Marine forever … surrounded by friends wrestling for a spot to carry my litter. Even if I died a few moments later, it didn’t matter. My name was made. I was at peace among these warriors.

After many months recuperating, I returned home to the dumpy town of Utica, N.Y., and spent a couple of years putzing around meathead mill jobs before moving to Charleston and deciding to go back to school on the GI Bill. I saw the comedian Colin Quinn do stand-up here a while back, and he said, “Charleston is like that pretty girl that hears how beautiful she is every day and is just sick of it,” which pretty much nails how gorgeous this town, and specifically this campus, is.

To enroll, I took advantage of the VA Vocational Rehab program, which looks at your VA disability rating and whether or not your injuries would prevent you from doing the job you had in the military. For me, this was an obvious fit: I don’t know if you’ve looked at the civilian machine-gunner job market lately, but, I assure you, it’s not exactly teeming with opportunity. This, combined with the fact that I had a bullet go through my entire torso, made me eligible for the program.

I worked with the veterans’ representatives here on campus, mainly Mat Garrison, to get me set up. It’s been a pretty amazing experience. It’s so stable, and Garrison, a veteran himself, will jump through hoops of fire for us veterans. And I’ve had the opportunity to learn from some truly amazing professors who have afforded me the chance to discover an intellectual career path. Being around people who get to think about the larger questions in life and in the world has been unreal. I get to go to a place every day where I discuss the things that have always interested me, the things I was never really allowed to focus on because of the work tempo in a 9-to-5 job – or machine-gun rounds flying over my head.

It’s like I’ve entered into this mythical place – a place that grunts like me would joke about when the freezing rains in Afghanistan were unyielding and every day held the real possibility that our young lives would end. There’s a thinking in the Marine Corps for those “back on the block” (civilian life): There’s no formations to show up to; your friends don’t get killed all the time; and your life is probably going somewhere. When you’re in a war, you enter this chapter of your life that’s apart from every other chapter before and after. You don’t know what’s going to happen there; it could be your final chapter – it often is.

At times, I feel like I’m Neil Armstrong back from the moon, annoyed by gravity, and, at the same time, aware of the much bigger picture of life. I went from lying in opium fields and touching the whiskers of God’s beard after getting shot, to sitting in Addlestone Library, overlooking a sun-soaked patch of grass with college students studying on blankets. Sometimes, I just laugh to myself when I realize how much of a paradise this place is and, then, I sit back and know how lucky I really am.

– Matthew McElhinney served for four years in the Marine Corps
and is now a rising senior at the College majoring in English.