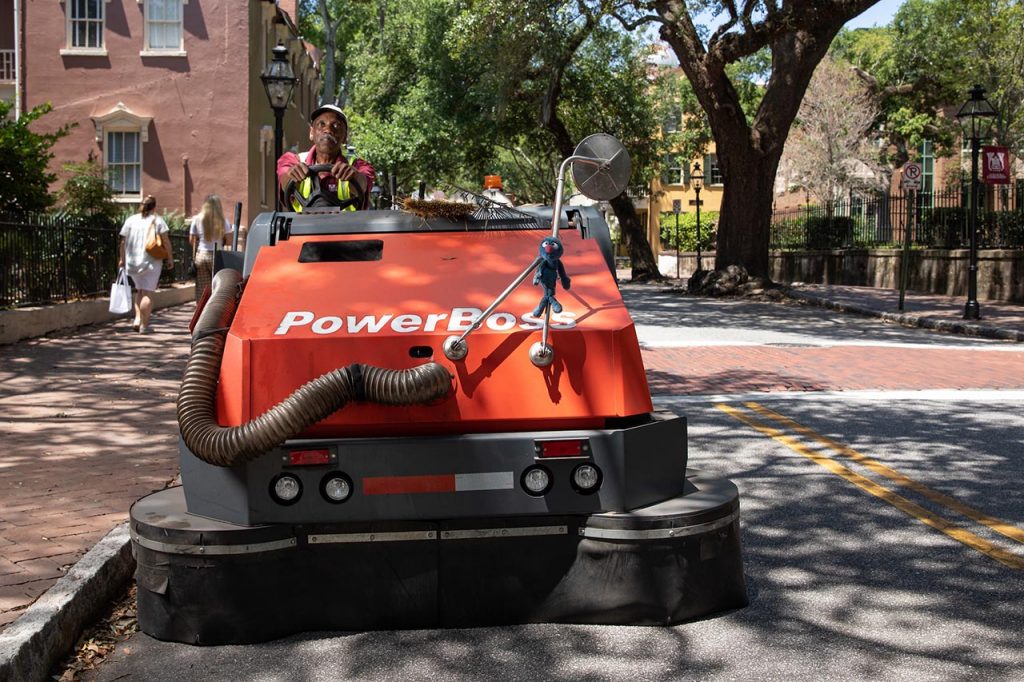 The little orange box of a vehicle hums along George Street, staying close to the curb as it passes Porters Lodge – the iconic entrance to the College of Charleston’s Cistern Yard. About halfway up the street, the driver, Walter Brown, confidently whips the golf cart–sized street sweeper around to take another pass along the opposite curb. A doll of the lovable Sesame Street character Grover keeps watch over the campus from his perch on the sweeper’s rearview mirror.

For Brown, who’s been the College’s street sweeper and irrigation tech for nearly 10 years, minding CofC’s streets is an art, a dance between man and machine to make sure the College’s roads are clean and neat.

The oak trees that frame the campus drop their leaves about every three to four months. At those peak times, Brown can been seen bumping along the College’s roads sucking up leaves two to three times a week.

But sweeping leaves is far from all Brown does. A jack-of-all-trades, Brown does “a little bit of everything” as part of the College’s Grounds Department in Facilities Management.

“If somebody doesn’t come to work and another crew needs me, I do that,” he says matter-of-factly.

And what he does is a lot. On any given day you’ll likely spot Brown first thing in the morning using a blower to drive leaves to the curbs of campus streets before hopping on the sweeper to whisk them away. Then he might help plant and water flowers, trim shrubs and, if needed, fix a broken sprinkler head. And when commencement rolls around, he usually pitches in with decorating the stage and tidying Cistern Yard for the occasion. 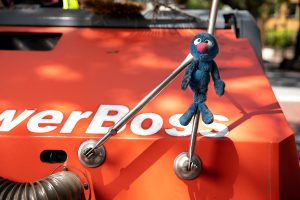 Grover rides along as Walter Brown sweeps the streets of the College of Charleston.

Brown tackles each duty with a keen eye, fine tuned to complete the job down to the smallest detail. Take planting flowers, for instance, one of Brown’s favorite tasks. He says over the years he’s learned that location is key to ensuring a flowering plant grows big and bright.

The expertise with which the grounds crew tends to the campus’ flower beds, walkways, sidewalks and streets became a point of pride for Brown and his co-workers in 2017 when Travel + Leisure named CofC winner of its “Most Beautiful College Campus” contest.

“At first we didn’t give it a thought,” notes Brown of the accolade. “But then we heard about it so much, we got real proud about it. It was a good thing.”

These days, working amid the hot summer humidity of the Lowcountry, Brown says he’s thinking about retiring next year. He wants to have a little more time for himself and his family (he has 11 grandchildren and one great grandchild) and maybe spend the summer indoors where there’s air conditioning.

As for training the next generation of street sweeper, Brown says mastering the vehicle is just like anything else – it takes practice. You’ve got to know how to stop every so often to rake the leaves in the tank forward to make room for more. You’ve got to know when it’s time to empty the tank so you don’t leave a trail of debris behind you. And you have to remember to turn the sweeper off during each class change to avoid the flood of students on campus streets.

“To really get used to it, you’ve got to drive it,” says Brown. “It’s like driving a car or roller skating or riding a bicycle. Once you learn it, it’s really easy.”