When it comes to space exploration, it seems like today’s middle and elementary school students are more familiar with Buzz Lightyear than with Buzz Aldrin. 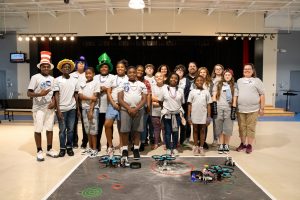 As the director of the South Carolina Space Grant Consortium,  which is based at the College, Runyon is on a mission to reignite excitement in space exploration, particularly in school age children. She says she is concerned that so many students are not aware of the level of success the United States has had in space exploration. She thinks it may be because in recent years, the country has lost some interest in going into outer space.

“We have not had a national challenge like the Apollo program in 50 years,” she says.

Under Runyon’s leadership, the Consortium is working with elementary and middle school teachers to bring the excitement of space exploration back into the classroom.

“It is more than just reading something in a book or looking at slides,” she says. ” You have to engage these students with hands-on learning.”

RELATED: Learn more about Runyon’s involvement with NASA and her childhood memories of the moon landing in 1969.

One of those hands-on learning events occurred on Thursday, July 18, 2019, when the Consortium teamed up with the Charleston County School District to hold the South Carolina Apollo Next Giant Leap Student (ANGLeS) Challenge. Timed just two days before the 50th anniversary of the Apollo 11 moon landing, the competition gave teams of middle school students the chance to recreate the Apollo 11 moon landing by using drones and a LEGO Mindstorm robot.

Runyon says these fun events help to introduce students to the wonders of space exploration. She says it is easy to see how this kind of learning works.

“When we first came out to work with these students, they were a little bit leery and a little bit afraid of the robots,” says Runyon. “But once they discovered that they could do something cool with the robots, they burst into smiles, started sharing ideas and enjoyed themselves.”

She says the Consortium will host another robotic competition next year. The winning team in that competition will be invited to attend the Mars 2020 rocket launch at Cape Kennedy in July 2020.

Runyon hopes that these types of programs and events will expand a student’s love of space to infinity and beyond.