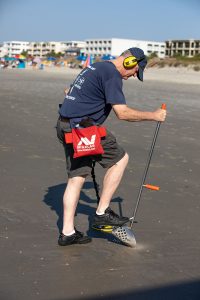 In a way, Gary Kirkendall’s hobby is a lot like his job. Both require patience, knowledge and in some cases, a little luck.  And both also involve a little bit of digging to get to the truth. So it should be no surprise that Kirkendall, a detective with the College of Charleston Department of Public Safety, is also very good at his hobby of metal detecting.

Kirkendall had his first taste of the hobby when he was a middle school student in the town of Elmira, New York, tagging along with a friend as his friend’s dad searched a field with a metal detector. Kirkendall thought it was kind of cool, but really did not take to the hobby until the early 2000s. Nowadays, Kirkendall goes out a couple times a month to the beaches of Isle of Palms, Folly Beach and occasionally Myrtle Beach. He has unearthed items such as old coins, jewelry and, on occasion, an old pocket watch. 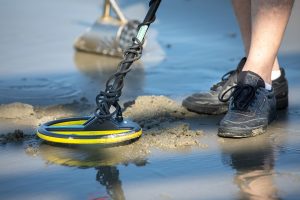 But one of the most memorable finds occurred in August of 2017. Kirkendall was walking along the shore on Folly Beach one morning, when his metal detector started to buzz. After digging down in the sand several inches, he found a very unique item: a College of Charleston class ring. He knew the person who lost the ring would want it back, so Kirkendall contacted Anne Pryor ’83, vice president of alumni affairs, to try to find the owner.

Using the initials and the graduation date engraved in the ring, the Office of Alumni Affairs determined the ring belonged to Trey Dale ’11. 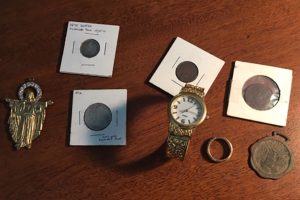 A few of the treasures that Gary Kirkendall has found while metal detecting.

“He was extremely excited about receiving our phone call,” says Pryor.

Dale told Pryor that he and some friends were throwing a football in the surf off Folly Beach, when the ring slipped off his finger. Dale and his friends frantically searched the area for a long time, but they were unable to locate the ring. He thought it was lost forever. But thanks for Kirkendall and his hobby, the ring was back – and Dale came to the Office of Alumni Affairs to retrieve it soon after he’d received the call. 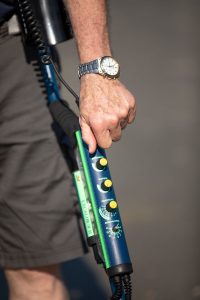 “He was so relieved,” said Pryor. “He hugged everyone in the office.”

Dale’s next phone call was to Kirkendall.

“I got a phone call from him one day out of the blue,” Kirkendall says. “He was quite happy to get it back.”

So happy, in fact, that he gave Kirkendall and his wife a gift certificate to a Mount Pleasant restaurant as a “thank you.”

Of course, most of Kirkendall’s finds are not as exciting as that one. Along with the occasional silver coin, he has also unearthed his fair share of bottle tops and old beer cans. But that’s not really what Kirkendall likes about treasure hunting anyway: He likes the exercise, being outdoors and the unlimited possibilities that surround each and every dig.