If you tuned in to the start of Shark Week on the Discovery Channel this Sunday, July 28, 2019, you may have noticed a familiar face. 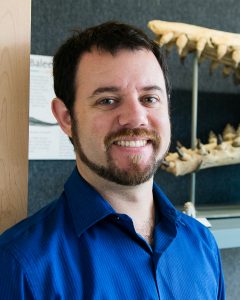 College of Charleston paleontologist Robert Boessenecker appeared in the program Expedition Unknown: Megalodon. In the show, Boessenecker showed host Josh Gates around the badlands of Baja California as they searched for 3 to 4 million-year-old shark teeth.

Earlier this year, Boessenecker and a team of scientists discovered that the extinction of the giant shark known as megalodon may have occurred much earlier than first believed. Their research showed that the giant shark Otodus megalodon became extinct about 3.6 million years ago. That’s more than a million years earlier than researchers first projected the shark’s extinction. The megalodon was the largest shark ever documented and the largest fish on record.

This is Boessenecker’s first appearance in a Shark Week program, but it is not the first time that the Discovery Channel has featured a megalodon. During Shark Week in 2013, the network aired a program called Megalodon: The Monster Shark Lives about the possible return of a prehistoric creature that went extinct millions of years ago. Despite a brief disclaimer that it was fiction, many people thought the documentary was real and many scientists were furious at the network for confusing viewers.

Boessenecker says he remembers watching Shark Week as a child in the early 1990s. At that time, he says the programming was scientific and based around natural history. But that changed.

“It has sort of devolved into shows about shark attacks, leaping great whites killing fur seals, references to JAWS, and very little genuine scientific content,” he says. “In the past, several colleagues have had their interview answers taken wildly out of context and there was of course the unfortunate ‘Megalodon Lives’ fake documentary.”

RELATED: Read more about Boessenecker’s research on the megalodon.

Boessenecker says the writers on the Expedition Unknown: Megalodon program, in an attempt to “right the wrong” about the fictional megalodon programming, approached him about his recent research.

“I’m optimistic about this show given my interactions with the host and wonderful crew, who indicated that getting the science right – but making it digestible for a typical audience – was their top concern,” he says.

Shark Week on the Discovery Channel continues through Sunday, Aug. 4, 2019.