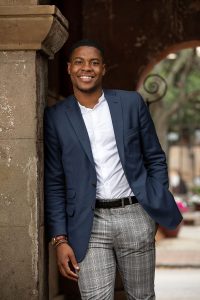 Pursuing something for the first time can be a little scary. It can also be transformational.

Or, as rising College of Charleston senior Britt Soyebo puts it: “Staying home doesn’t get you anywhere.”

That’s why he decided to put his nerves aside and took advantage of a federally funded summer research project through the College’s Research Experience for Undergraduates (REU) program – immersing himself in computational biology at Auburn University. It was the first summer he wouldn’t spend outside playing soccer. The first time he’d spend more than a couple weeks away from his family. The first summer he’d be in a new place with new people studying a new branch of medicine.

“It’s my first time away from home and I’m a little nervous. I’m an outside person, so I’m not sure about spending my summer in a lab,” said the public health major/chemistry minor before he left for Auburn, Alabama, earlier this summer. “But I’m a social butterfly, and I like to meet new people. Besides, I don’t want to deny myself a great experience just because it’s uncomfortable.”

And now that he’s been studying at Auburn all summer, it’s not uncomfortable at all.

“These ‘jumping DNA’ structures are major sources of the genetic variation due to mutations and chromosomal rearrangements,” says Soyebo. “What we do know is that these mobile DNA sequences affect genome evolution and can cause detrimental mutations, gene disruption and chromosome rearrangements that may lead to several pathologies, including cancer.”

And therein lies the “why” behind Soyebo’s summer research, which is part of a grant from the National Science Foundation.

“The findings in my research will be the foundation for a study that explores the effect of TEs on the genetic variation in response to changing environmental conditions,” Soyebo continues. “Initial identification on TEs will allow Dr. Stevison to identify particular TE families in Drosophila genome where recombination rates are different and explore how environmental stressors effect their movement, their expression and their interaction with recombination pathway components. They will be testing extrinsic factors such as age, environmental temperature, starvation. Their expression effects important regulatory enzymes in genomes that contribute to DNA repair mechanisms, cell proliferation and development.”

On a bigger scale, Soyebo says, “full understanding of TE movement will help a new branch of medicine called gene therapy, which introduces new DNA into a patient to treat a genetic disease. The new DNA contains a functioning gene to correct (turn on/off) the effects of the disease-causing mutation.”

In other words, discovering the “unknown” could be transformational.

This experience certainly has been for Soyebo, who hopes to pursue a career in medicine after college.

“Working at Auburn with Dr. Stevison is recognition of Britt’s accomplishments in pursuit of an M.D./Ph.D.,” says CofC adjunct chemistry faculty member Cat Potter, whose letter of recommendation Soyebo credits with making this experience possible for him. “Britt is a triple-threat candidate: intelligent, charismatic and humble. He is truly dedicated to learning.”

That’s why the former Cougars soccer player also gave up soccer after two years at the College.

“Giving up soccer was one of the hardest decisions for me, but you’ve got to realize the ball’s going to stop bouncing sooner or later, and I wanted my focus to be on school,” he says. “Nothing else matters more while I’m here, and I don’t get more time to be in college. If you make yourself aware that this is your one chance to dedicate yourself to learning, you don’t want to do anything else.”

The thought might be a little bit scary, but – for Soyebo at least – it is truly transformational.