A new study led by a College of Charleston researcher shows that some dinosaurs may have taken flight thanks to sex appeal.

Researchers know that many dinosaurs were covered with simple hair-like feathers. These feathers served as insulation and had absolutely nothing to do with flight. But it has been unclear how these simple hairy feathers later developed into complicated feathers on wings. 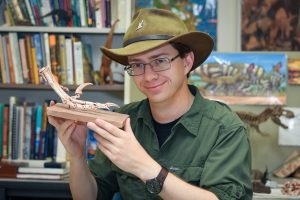 Scott Persons, the lead author of the study Feather Evolution Exemplifies Sexually-Selected Bridges Across the Adaptive Landscape and curator of the Mace Brown Museum of Natural History at the College of Charleston, says new research shows that between insulation and flight, feathers had a third function: sexual display.

According to the report, larger, stiffer, flatter feathers very gradually evolved as showy fans on the arms and tails of dinosaurs to be waved and wagged in courtship displays.

“Sexual display remains an important function of complex feathers in some birds,” Persons explains. “Think of the feather fans of turkeys and peacocks or the head crest of a cockatoo.”

The new study makes the case for feather complexity needing the intermediate contribution of sex appeal and outlines how the growing fossil record of early feathers supports this interpretation. But the research also goes a step further.

A chart showing the evolution of dinosaurs to birds.

“The evolution of avian flight is one of the most important transitions in vertebrate evolution,” says Persons. “There are now over 10,000 species of birds, and birds were the only group of dinosaurs to survive the mass extinction. The extraordinary success of birds is tied to their ability to fly. But, to evolve into complex flight feathers, traditional natural selection needed a boost from sexual selection. Effectively, sexual selection led to an increased complexity, which bridged the gap from one function to another. Recognizing that critical contribution teaches us something fundamental and important about the evolutionary process. The implications go way beyond the single example of dinosaurs and feather evolution.”

To explain the importance, the study uses an old metaphor long favored by scientists called the adaptive landscape: a graphical representation of how beneficial different traits are to an evolving group of organisms.

“Imagine a jagged terrain, really mountainous,” Persons explains. “High peaks on that landscape represent high evolutionary success, and low valleys are relative failures. Natural selection pushes an evolving lineage ever uphill. For example, as bones get harder and stronger in some evolving population, altitude on the landscape is gained. But that can only go so far. If bones get too stout, they will weigh you down. There is an optimal, a peek beyond which things start to go back downhill. Natural selection does not let that happen and pushes back upslope towards the peek. Lineages can evolve some set of traits and refine them, but can go no further. So, lineages are marooned on the adaptive landscape. But sexual selection doesn’t play by the same rules. It can favor heavy, gaudy, and wasteful structures. Sexual selection can push evolution off of one peak, carry it over the landscape, and, potentially, arrive at a new even taller peak. That’s how you go from insulation to sexual display to flight.”

The new report appears in the latest issue of the scientific journal Evolution.