Never underestimate the Power of Place. The memories made in a special place and the lessons learned there can live on for a lifetime – and that’s exactly what happens through the College of Charleston’s study abroad program in Trujillo, Spain. 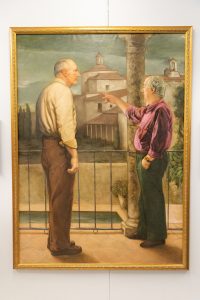 In 1995, Esther Ferguson and her late husband, James, donated their beloved properties in Trujillo, Spain, to the College of Charleston. The properties were a labor of love; together with their friend and neighbor, Duarte Pinto Coelho, the couple painstakingly worked to restore a Roman ruin, including original Roman columns on the front porch, which they recovered from a nearby highway project.

It was Ferguson who pushed to donate their Trujillo home to the College as an educational tool. She envisioned a program where students could have an immersive language experience by living with a local family and then gathering together at her home to study and learn. The College launched its first study abroad program there in 1996. Today more than 2,000 CofC students have participated in the study abroad program, each with unforgettable academic and cultural experiences.

On Aug. 1, 2019, Ferguson unveiled yet another gift for the College – a painting she had commissioned of her late husband and the late Duarte Pinto Coelho, on the front porch of their home near one of the Roman columns.

The painting is prominently displayed in the Department of Hispanic Studies along with a plaque. 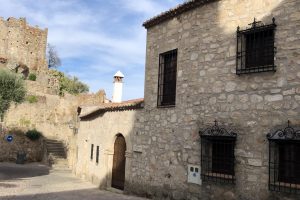 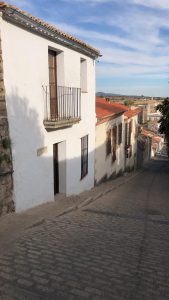 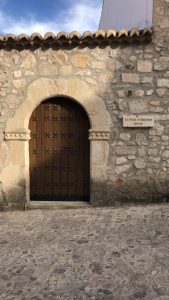 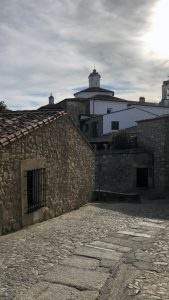 Views of the Trujillo properties Ferguson donated to the College.

“We are very honored to receive this special gift from a very generous person,” says Mark Del Mastro, associate provost for curriculum and academic administration and former Hispanic studies department chair. “Because of Esther, we have a well-established, incredibly successful study abroad program in Spain. The painting symbolizes the success of our study abroad program in Trujillo.”

RELATED: Check out the Hispanic studies podcast, HispaCasts, to listen to a conversation with Mark Del Mastro and Esther Ferguson. 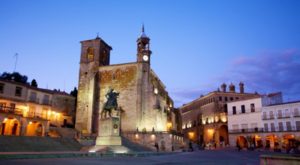 Plaza Mayor Trujillo is among the many places students visit during their study abroad trip to the medieval Spanish city. (Photo provided)

“Jim and Duarte are who got me to Trujillo,” says Ferguson. “Both of them were key to restoring the Roman ruin and our ultimately giving the casa and casita to the College.”

Ferguson’s generosity to the College also extends to her time. She is now the newest member of the Hispanic Studies Advisory Board.

Fran Welch, interim provost and executive vice president for academic affairs, presented Ferguson with a gift in gratitude for all she does for the College, saying: “We are grateful for the wonderful opportunity you have given to our students.”

Thanks to Ferguson, CofC’s students get to experience a place that mirrors Charleston with its rich history, beauty, traditions and culture.

Featured image: Esther Ferguson with Mark Del Mastro at the event celebrating the donation of a painting she commissioned of her husband and neighbor at her former home in Trujillo, Spain. (Photos by Heather Moran)

About the Author: Darcie Goodwin