Summer Research Program to be Featured on Podcast

By Alicia Lutz|2020-02-25T12:56:09-05:00August 8, 2019|Academics, Campus Life|Comments Off on Summer Research Program to be Featured on Podcast
You don’t have to be an expert in invasive red algae or macroalgae microbiomes or domoic acid toxicosis to understand the significance of these students’ research findings. After 10 weeks of intensive research with the Fort Johnson Summer Undergraduate Research Program at the College of Charleston’s Grice Marine Lab, the results of their studies are clear: improved communication skills, more defined career goals and – perhaps most important – confidence in themselves and their work. Every summer, up to 10 undergraduate students come from all over the country to investigate marine organisms and their health at the individual, population, community and species levels under the general program theme, “Resilience and Response of Marine Organisms to Environmental Change.” The National Science Foundation (NSF)–supported Research Experiences for Undergraduates (REU) program is part of a major initiative to keep undergraduates, especially those from underrepresented minority groups, moving into STEM careers. Established at the College in 1992 and receiving NSF funding in 2000, the program has seen some 212 students over the years. The students live in Grice Marine Lab housing and work with faculty mentors from a variety of institutions. “The REU is a prestigious opportunity for the nation’s most talented undergraduates to participate in professional research,” says Mike Janech, associate professor of biology at CofC and mentor to one of this summer’s student researchers. “The College REU program, being at a primarily undergraduate institution, creates an exemplary training environment with all the focus on the student. Unlike large research universities, mentors interact closely with students to facilitate learning and help the student develop their scientific interests.” And, this year, the students and their research got some extra attention when the husband-wife team from the Atlanta-based nonprofit Last Chance Endeavors (LCE) spent three days with the students interviewing them for their podcast, “Conservation Connection.” The experience also underscored for students the importance of communicating scientific information effectively to a mainstream audience. “Our goal is to bring the voices of the leading conservationists and scientists out of their lab or field and into the public arena, where anyone in the general public can have access to the research and discoveries that are currently being conducted to protect the future of our planet’s habitats,” says Chance Ruder, co-founder of LCE. “The point in the long run is that the general public is aware of and can understand these issues and their roles in preserving our natural world.” 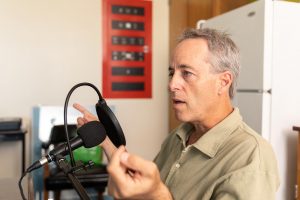 Bob Podolsky. director of the the Fort Johnson Summer Undergraduate Research Program, is interviewed on the “Conservation Connection” podcast. (Photos by Heather Moran)

Indeed, says Grice Marine Lab Director Bob Podolsky, who has served as the REU program’s director since 2014, the College’s program combines independent research with activities that promote career development and science communication skills. “Since I’ve overseen the internship,” says Podolsky, “we’ve continued to emphasize the science communication component. Science communication isn’t easy, especially for a generation more accustomed to receiving information. This experience gives students a little more comfort with being the communicators.” To improve their communication skills and give them that experience, students in the program are required – among other things – to attend science communication workshops, write their own blog posts and make short science communication videos about their research. “I have them focus on emphasizing their goals with simple language for a variety of different audiences,” says Podolsky. “Keeping the language simple makes the messaging more effective. So, I first have them write what they’re doing in their research, first explaining it to a scientist, then to a high school student and then to a 9 year old. It really gives them some perspective, I think. The goal is that their science should be clear to the general public.” 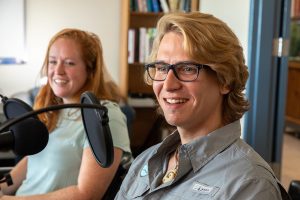 Although it wasn’t the first time LCE had interviewed faculty from the College of Charleston for the podcast, it was its first time it had interviewed undergraduates for their podcast. RELATED: Listen to the “Conservation Connection” podcasts with Bob Podolsky, assistant professor of biology Jody Beers and biology professor Gorka Sancho. “We were super excited to come study with the students in the REU program,” says Sarah Kathryn Ruder, LCE co-founder. “It was a really good weekend – informative and fun.” In addition to attending an outreach event at the Magnolia Plantation Ladybug Festival and a Lowcountry boil with the REU students and faculty, the pair interviewed the students and some of their mentors. RELATED: Listen to the first of the “Conservation Connection” podcast’s REU Mini-Series, featuring College of Charleston biology professors, Bob Podolsky and Heather Fullerton. The other three podcasts in the mini-series are scheduled to air August 18, August 25 and September 1. “That was a really cool experience for all of them, I think,” says Podolsky, noting that the podcasts can heighten the national exposure the program already brings to the College. “The students can feel overwhelmed by their projects, but when they make the personal connection like they do with the podcast, it is less so. The level of saturation they’re getting in a professional mode is really invaluable. For example, they’re experiencing firsthand the roadblocks that you encounter when you do science; it’s something they have to learn how to overcome, because there are always obstacles. These lessons are hard to get from the classroom.” Janech agrees, noting the significance of the program’s location – which is not only right on the Charleston Harbor – but includes marine science laboratories, the Fort Johnson Marine Resources Library, animal holding facilities and access to the College’s partners at Fort Johnson: the Medical University of South Carolina, the S.C. Department of Natural Resources, the National Oceanic and Atmospheric Administration and the National Institutes of Standards and Technology. 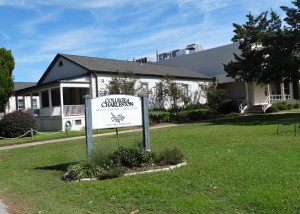 “The analytical capability of Hollings Marine Laboratory alone rivals most universities,” he says. “Students have the capability of using some of the most advanced technology to answer questions in biology because of the high concentration of experts and technology under one roof. This environment also permits students to examine career choices by directly interacting with the scientists working in their field of interest.” “We’re not just giving them that background in scientific research – we’re giving them the opportunity to figure out if it is the right career choice,” adds Podolsky, noting that, toward the end of the students’ internship, they attend a career night that introduces them to different scientific tracks as well as to the graduate school application process. “Not all of them will go on in scientific research. But hopefully they all go on in STEM fields – as environmental lawyers, public policy makers, teachers. Regardless, I just want them all to have an experience of science and a really positive sense of achievement at the end.” Heather Fullerton, assistant professor of biology, says the student she is mentoring is learning standard biology techniques and how to troubleshoot methods – critical skills Fullerton thinks are best learned while on the job. “These skills will help her with any future career or educational endeavor she embarks on, whether it’s in biology or not,” says Fullerton. “She’ll also learn what it is like to work with other scientists, particularly women, in mentored research. Science is hard work, but it can also be fun, and this program ensures that both goals are met. These supportive experiences are critically important for fostering the next generation of scholars.” And it’s not just the students who benefit from these supportive interactions. “It has been a wonderful experience for me, in part because the research would not have proceeded as rapidly without her talents,” says biology professor Erik Sotka of working with his mentee this summer. “More importantly, I really enjoy watching students become more confident in their abilities and grow as scientists.” And, in the end, finding that confidence is the most significant result of all. Featured image: Lillia Garcia, a student from Illinois Wesleyan University in the REU program, talks to Sarah Kathryn Ruder and Chance Ruder, co-founders of Last Chance Endeavors, for their podcast, “Conservation Connection.”