What did you do on your summer vacation? For ocean lovers, it would be hard to top what three marine biology majors at the College did with visiting assistant professor of biology Chris Freeman this summer. Through a combination of Summer Undergraduate Research with Faculty (SURF), School of Sciences and Mathematics awards and a National Science Foundation (NSF) grant, Samantha Czwalina, Abby Stephens and Bailey Fallon spent six weeks at the Smithsonian Tropical Research Institute (STRI) on Isla Colón, a small island on the northern (Caribbean) side of Panama.

While Freeman was studying the paradox of coral reefs – the presence of incredible biodiversity in ecosystems that are the nutritional equivalent of marine deserts – Czwalina, Stephens and Fallon conducted independent research projects on sponges. Czwalina looked at the role that common Caribbean sponges play in the cycling of nutrients on the reefs; Stephens studied sponge reproduction; and Fallon investigated whether microplastics are found in sponges. 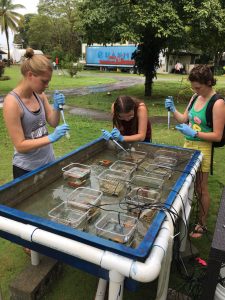 “Overall it was a great success in terms of all the work that we completed and a great opportunity for the students to be involved in the NSF project and also conduct their own research,” says Freeman, who was working along side his collaborators on the NSF project: Robert Thacker from Stony Brook University, Cole Easson from Middle Tennessee State University, and Cara Fiore from Appalachian State University.

They were looking for clues to the big question in coral reef ecology: how can so many organisms survive and coexist on these nutrient-poor reefs? “We were testing the hypothesis that unique associations with microbial symbionts have contributed to the success of sponges in the Caribbean by allowing coexisting sponge species to utilize different sources of nutrients on one reef,” says Freeman. “This reduces competition for resources and helps contribute to and support biodiversity in these systems.”

While it’s still too soon to shed light on Freeman’s hypothesis, the students have some preliminary findings to report. Czwalina, an Honors College student, found that some of the most common and largest Caribbean sponges release dead cellular material (detritus) that may stimulate local food webs and contribute to the retention of nutrients on these reefs. Stephens, also a student in the Honors College, surveyed and successfully isolated tiny sponge larvae from several species, and Fallon preliminarily found microplastics in the water and also in the tissue of nearby sponges.

Every day, the three students were out snorkeling or diving the shallow reefs around STRI.

“Punta Caracol was everyone’s favorite reef site because it has the most species diversity and some deeper spots that were great for free diving,” says Fallon. “Saigon Bay is the location where we collected sponge, sediment and water samples for my project. It borders an area with several hostels, hotels and restaurants, so we figured our best chances at finding microplastics would be there.” 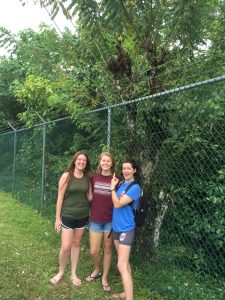 For Fallon, the best part, besides the late-night thunderstorms and “occasional howler monkey symphony,” was the relationships she and the other students built with their fellow researchers, most of whom were working biologists or graduate students working on their master’s and doctorates.

“I was blown away by how supportive and caring they all were,” she says, noting that most of the researchers were female. “I had several lengthy conversations with other female researchers that were tremendously helpful to my project.”

She adds, “It was incredibly inspiring to bear witness to such a host of influential women of science, and to find myself becoming a part of it. I have tremendous respect and admiration for those women and was thrilled to see them supporting one another in a field that I feel has historically been male-dominated.”

Fallon, Czwalina and Stephens will join Freeman at the Hollings Marine Lab on James Island this fall and spring to analyze samples from their research projects and assist with processing for the NSF research. At Hollings, Fallon will be developing and optimizing methods for isolating and visualizing microplastics within sponge tissue; Czwalina will spend a lot of time looking through a microscope as she starts to model the fate of sponge detritus in nearby coral reef organisms; and Stephens will be characterizing the microbial communities within adult and larval sponges to determine if microbial symbionts are passed from a parent sponge to their offspring.

“I am extremely humbled to have been selected by Dr. Freeman and then supported by the College of Charleston URCA department,” says Czwalina, referring to the Undergraduate Research and Creative Activities Program. “It’s been amazing to have support financially through the college and both academically and personally through the mentorship I received in Panama. As someone who has changed their major multiple times, getting this hands-on experience has been instrumental in figuring out that I want to go to graduate school and affirming my passion for research and marine science.”