Beyoncé Gets the Academic Treatment at College of Charleston

While the rest of the world gathered around their laptops and televisions on April 23, 2016, to witness Beyoncé’s vision for her Lemonade album, College of Charleston Director of African American Studies Kameelah Martin logged into social media to discuss the film with her peers.

Out of these late-night discussions came the idea for an academic look at the pop icon’s work. Martin teamed up with Kinitra Brooks, the Audrey and John Leslie Endowed Chair in Literary Studies in the Department of English at Michigan State University, to edit The Lemonade Reader.

The text, which was published earlier this year, is an interdisciplinary collection that explores the nuances of Beyoncé’s 2016 visual album. 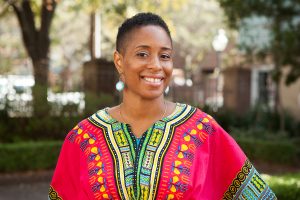 “We wanted to take the moment, all the conversations that were happening, and intellectualize it in more scholarly terms,” says Martin. “We wanted to solidify that this piece of work is in a particular black feminist tradition.”

The women gathered scholars and popular bloggers to put together a collection of essays aimed at a “black feminist investigation into constructions of race, gender, spirituality, and southern identity.”

The Lemonade Reader will be the focus of a panel discussion on Feb. 26, 2020, from 6 p.m. at the School of Education, Health, and Human Performance Alumni Center at 86 Wentworth St. The event is free and open to the public. The panel will include Martin, Brooks, Regina Bradley, assistant professor of English and African Diaspora Studies at Kennesaw State University, and Birgitta Johnson, associate professor of ethnomusicology at the University of South Carolina. The event is sponsored by the College of Charleston African American Studies Program, Avery Research Center for African American History and Culture, Women’s and Gender Studies Program, and the Black Women’s Caucus.

“Black women and popular culture are a hot topic — it’s important to consider those two subjects together. It can produce a lot of scholarship, theory and work,” says Martin. “This particular visual album marks a transitional moment in Beyoncé’s career. It showcases her political leanings. She is unapologetically embracing her black identity, but not just that, she’s focused on black women’s traditions, particularly in the South. Traditions of healing and traditions of spirituality. That’s not something we’ve really seen from a pop icon.”

Influences from the African diaspora to Toni Morrison are discussed in The Lemonade Reader. The editors set the collection of essays as an accessible classroom text.

“Even if you’re not a Beyoncé fan, it’s a phenomenal piece of art,” says Martin. “We’re here to help people think through what she and her 71 other collaborators [on the album] are doing. It’s stunning and groundbreaking.”

Photo of Beyoncé by Rocbeyonce