Sometimes it takes an entire day to honor someone. For Charleston native Roberta Williams, that day will be Sept. 11, 2019. 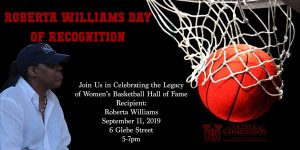 Earlier this year, Charleston Mayor John Tecklenburg designated September 11th as “Roberta Williams Day” in the City of Charleston. Williams, a Women’s Basketball Hall of Fame inductee, will be honored for creating a legacy of greatness through excellence in basketball and community service.

The College of Charleston’s Avery Research Center for African American History and Culture will celebrate Williams by hosting a recognition reception that day from 5 p.m. to 7 p.m. at the College of Charleston President’s House located at 6 Glebe St. Williams is the daughter of John Harley Williams, a former student of the Avery Normal Institute, now the site of the Avery Research Center. The Avery Normal Institute was one of the first secondary schools to legally offer formal education for emancipated slaves and free people of color and served as a hub for African Americans in the Lowcountry until it closed nearly 100 years later in 1954.

Roberta Williams is a 1976 graduate of Burke High School, and a 1980 graduate of South Carolina State University. She had a successful college career playing women’s basketball with the Lady Bulldogs, leading them to the Association of Intercollegiate Athletics for Women Division II National Championship in 1979.

She was inducted into the Women’s Basketball Hall of Fame in Knoxville, Tennessee as a “Trailblazer of the Game” of the WBL, the first Women’s Professional Basketball League in the U.S.

After her basketball career, she returned to Charleston and worked as a substitute teacher for over 20 years in Charleston County schools. Williams currently works at the Charleston Drug and Treatment Center as a recovery assistant and substance abuse specialist.

The event is open to the public. For more information, contact Courtney Hicks.