Philosophy Professor Believes in the Power of Ethical Justice

We think of criminal justice as the righting of a wrong, a means of making someone pay for doing something society deems unjust. But sometimes handing down criminal justice isn’t as black and white as doling out punishment. Sometimes justice as defined under the law can create an unjust result for those living with criminal convictions but hoping to make a positive change.

As a virtue ethicist, philosophy professor Jennifer Baker is fascinated by the ethical contradictions found within the American criminal justice system. That’s why she has been putting her expertise to work as a representative on the Charleston County Criminal Justice Coordinating Council, which brings together law enforcement, prosecutors, judges, behavioral health professionals, victim and legal advocates, and community leaders to discuss ways of improving the local criminal justice system. 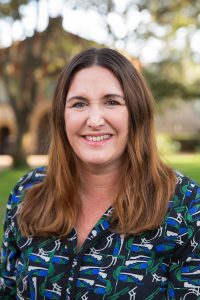 And the council has asked that question a lot since its inception in 2015. The group has successfully lead a variety of initiatives including implementation of automated text messages for court reminders to help reduce the number of offenders who may face secondary charges due to missed court dates; a pre-trial services report for bond hearings that assesses whether offenders are likely to miss court dates/commit new crimes pending trial, with a goal of reducing bond amounts for those considered low-risk; a risk-assessment tool that helps police officers decide whether to issue a ticket or a criminal charge to offenders facing minor charges such as shoplifting or single possession of marijuana; and the creation of a centralized database for the local criminal justice system (Charleston, North Charleston and Mount Pleasant) to help analyze trends and outcomes.

“A big part of the council’s success has been allowing these professionals to use their skills to make these tremendous improvements just by having the time and getting together,” says Baker. “It’s been eye opening to see how much inefficiency can be in a system if you don’t get together and discuss what you’re supposed to be doing.”

Baker’s work on the council provides powerful real-world examples that help make philosophical texts more meaningful for her students. For example, a recent discussion in her honors course Philosophy, Politics and Economics on Plato’s text Laws, opened the door to conversations about concepts of criminal justice.

“[Plato] really cares about motivating people to act lawfully,” says Baker. “And in the ‘Laws’ he discusses what he refers to as preludes, where he wants attachments to any law that explain and justify it.”

Baker contrasted that idea with a recent visit to General Sessions Court, where one offender received two and a half years of probation for a workplace theft charge even though he had paid back the money, and another offender was sentenced to time served after he spent a few months in jail because he couldn’t get in touch with his probation officer when the battery ran out on his phone.

“No one could explain the coherence of those sentences, and that’s one thing Plato thought was absolutely key to a just system,” she says.

In the fall of 2017, Baker went beyond discussion of real-world examples when she took students in her First Year Experience course Policing, Ethics and the Law to a local jail and General Sessions Court. The class made the trips after reading The Collapse of American Criminal Justice, which evaluates the criminal justice system from arrest to sentencing.

“To not see it I think would keep us from understanding what the texts are trying to explain to us,” she says. “To not see the end result of all these different policing philosophies falling together in haphazard ways would be a shame.”

More importantly, Baker believes that presenting genuine scenarios, rather than the sometimes fantastical thought experiments philosophers are known for, can empower students and the community to seek change.

“If you focus them on real-world examples, there’s the potential they’ll actually hit the ground running and have some proposed solutions to a real-world problem,” she says. “I think it’s always good to make a discussion a little more difficult, and real-world problems are often more complicated. And if it weren’t real, why would they care?”

The Charleston County Criminal Justice Coordinating Council is hosting a series of roundtable community discussions across Charleston County beginning Monday, Sept. 16, 2019. The College of Charleston community is welcome to attend. Sessions will be held weekly through the week of Oct. 7. Sessions at the Joseph P. Riley, Jr. Center for Livable Communities at the College’s WestEdge campus at 176 Lockwood Blvd. will be held Sept. 18, Sept. 25 and Oct. 2. Sessions will also be held near the main campus at Grace Cathedral Church at 98 Wentworth St. Sept. 19, Sept. 26 and Oct. 3. For a full list of roundtable locations and dates and to sign up to attend, visit this site.