Edward Hart ’88, professor of music and chair of the Department of Music at the College of Charleston’s School of the Arts, has composed music since before he started kindergarten.

Hart started piano lessons at around four years old. He says that he didn’t practice as much as he should, so he would get through his lessons by improvising – his first foray into composing.

“I would tell my teacher that I had written it just for her,” he recalls.

That early habit would eventually lead Hart to a full-time career in musical composition. 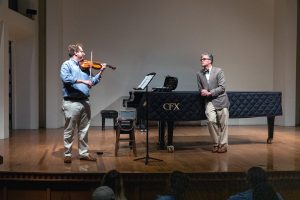 Edward Hart listens as Yuriy Bekker plays “Under an Indigo Sky” during a recent class at CofC. (Photos by Heather Moran)

Although Hart’s musical works have been performed across the globe, including Europe, Latin America and Africa, he says there’s something special about having his music heard at home.

“While it’s nice to have your work travel around the world, it’s really great to have your friends and family see it,” says Hart.

Hart, who teaches courses in music theory and music composition at the College, says he finds time to compose new works between classes, adding that his students continue to inspire his love of music.

His newest piece “A Charleston Concerto” will premiere during two concerts on April 17 and 18, 2020. The Shanghai Quartet, which Hart calls the Rolling Stones of his world, will perform the work. This piece is written as part of the 350th celebration of the founding of Charleston. There are three movements to the concerto: “Discovery” explores the experience of the first native people to set eyes on the Charleston harbor; “Tragedy and Reconciliation” is about Charleston’s complicated history with natural disasters, slavery, war and disease; and “Tomorrow” looks at Charleston’s optimistic approach to the future. Hart cites seeing then-Charleston Mayor Joe Riley on television in 1989 after Hurricane Hugo encouraging people to come visit after the cleanup as part of the inspiration for the final movement of the work.

A native of the Holy City, Hart not only has a long lineage of family in Charleston, but also in the music business. His family owned Siegling Music House on King Street, the oldest music store in the country until 1970. Opened in 1819, the store rented a piano out to composer George Gershwin upon his visit to Charleston.

And while Hart came to CofC to study economics, his natural ties to music won out.

“Beethoven was more interesting to me than gross national product,” he recalls.

Check out the Charleston Symphony website for ticket information.