It is not a stretch to say that T’Leya Walker is designing her future.

After graduating from Virginia State University in 2015 with a degree in manufacturing engineering, Walker decided to enroll in the Graduate School of the University of Charleston, South Carolina’s Community Planning, Policy, and Design (CPAD) graduate program.

“I was mainly looking for an architecture program while also taking courses in Real Estate,” says Walker. “When I searched for architecture programs in Charleston, the CPAD program appeared. After reading the brochure, I became interested in all the courses.”

Along with studying public policy, real estate economics and transportation planning, the program exposed Walker to an architecture studio course. And it didn’t take her very long to realize that she wanted to learn more about architecture design. 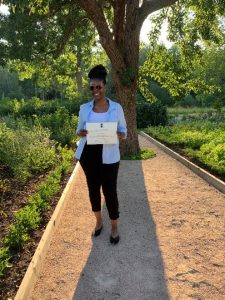 After being encouraged by CPAD program director Richard Grant Gilmore to apply to the Engelsberg Summer School in Classical Architecture, Walker was one of only 40 students worldwide to be accepted into the four-week intensive program in Stockholm, Sweden. During the summer program, which took place in July 2019, Walker learned about classical composition in architecture, worked on design projects and spent her days exploring historic Stockholm. She also spent a lot of time participating in discussions about technology, symbolism and modern classical architectural debates with world class instructors.

“The biggest highlight of this program was learning the fundamentals and basics of drafting and the history of classical architecture,” says Walker. “The insight that was given exceeded my expectations.”

Walker believes the summer program also allowed her to gain other experiences that will help her with her professional future.

“I initially wanted to gain more knowledge in technical drafting because it’s the earliest form of design developments and it will never fail,” she says. “This program has taught me more than design elements, it provided me with life lessons personally and professionally.”

Gilmore says the program works to encourage all of the CPAD students to take advantage of these extracurricular programs that enhance their world view.

“Engelsberg and other international experiences immerse our students in environments which stimulate creative responses to the challenges humankind is now facing due to climate change, urban sprawl and really poor architecture” he says. “Forms and technologies grounded in traditional practice highlight the adaptability of the human species. CPAD students can take these lessons and apply them to urban design contexts here in the U.S. or even if employed abroad.”

Featured image: T’Leya Walker learned about the fundamentals of drafting and the history of classical architecture while attending the Engelsberg Summer School in Classical Architecture.