It was a dark time in the history of Salem, Massachusetts. From February 1692 to May 1693, more than 200 people in the small New England village were accused of witchcraft, 19 of whom were convicted and executed.

To shed light on the history and hysteria of the Salem Witch Trials, College of Charleston history professor Jason Coy is appearing in a new four-part docu-drama, Witches of Salem, airing on the Travel Channel at 10 p.m. (EST) on Sundays. 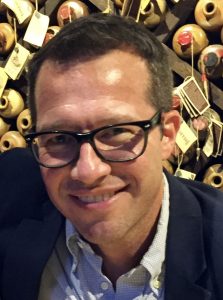 In the first episode, titled “Satan Comes to Salem,” which initially aired on Oct. 6, 2019, Coy discussed how young girls Abigail Williams and Betty Paris tried to predict their futures by playing a fortune-telling game that involved dropping egg whites into water when things took a frightening turn.

“They were trying to see who would be their future husbands, who they might marry someday,” Coy says on the show. “Supposedly the egg white coalesced in the bottom of the glass in the shape of a coffin. In an environment where they had been taught that dabbling in any kind of magic, any kind of occult activities – no matter how seemingly harmless – were really a way of allowing the devil to enter into your soul. They would have been terrified by this.”

The program takes viewers chronologically through the rising fear of witchcraft in the village that led to dramatic trials and public hangings.

RELATED: See Jason Coy in a preview of Witches of Salem.

Coy says the crux of those shocking and horrific events were all based on fear and misunderstanding.

“Fear can cause people to lash out at their neighbors and misfortune can cause them to look for scapegoats, sometimes – as in 17th-century Salem – with deadly results,” he says. “Throughout history, people have used witchcraft beliefs to explain personal misfortunes like mysterious illnesses. Sometimes people who believe themselves or their loved ones to be bewitched have pressured authorities to execute the suspected witches in hopes of ending their afflictions. In places like Salem, beset by fear and anxiety and with an ardent belief in diabolical witchcraft, the ensuing witch panic claimed many innocent lives.”

Producers for the show contacted Coy about appearing as an expert after finding out about his research on early modern witchcraft through the College’s history department website. The history professor’s interest in witchcraft stems from his passion for teaching engaging courses. He first began exploring the history of witchcraft as a capstone seminar about 10 years ago. Since then, he’s taught several history courses at the College focusing on the history of the European witch hunts, including most recently the course Witchcraft in the Modern World. His new book, The Devil’s Art: Divination and Discipline in Early Modern Germany, which explores witchcraft and folk magic in Germany, is due out in May of 2020.

“As a historian, I’ve always been interested in how people in the past sought to understand the world around them, and their beliefs in magic and witchcraft reveals valuable insights into their conceptions of religion, gender norms and cosmology,” he says.

Featured image: An 1876 illustration of a scene from a courtroom during the Salem Witch Trials.