Diversity isn’t just about increasing inclusivity among minority and underrepresented students. It’s also about elevating differences of thought and perspective. Having a variety of ideas from a variety of people can only lead to more ambitious goals and better solutions. 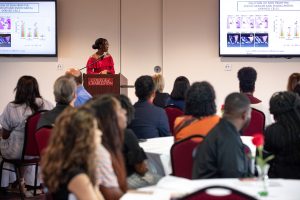 Marking the 25th year of the program, 2019 is a time to reflect on the thousands of students who have gone on to careers in STEM fields as a result. The College of Charleston celebrated SCAMP’s silver anniversary at the program’s annual banquet on Oct. 16, 2019.

“Even though this program is a statewide program, our program is very unique because it has the support of our two most important organizations: the School of Sciences and Mathematics and the Office of Multicultural Student Programs and Services,” College of Charleston President Andrew T. Hsu said during the banquet. “They put in a lot of time and effort into supporting this program and that’s why it’s particularly strong.”

Since its launch, the SCAMP program at CofC has positively impacted approximately 300 students’ lives and careers. Over the past four years, the College has implemented a new recruitment plan for the program, which has increased the number of SCAMP students by 43 percent – from 35 students in 2015 to 50 students in 2019.

“At the College of Charleston, considerable efforts are being targeted toward lessening the gap of underrepresented minorities in STEM fields,” says Sofia Agrest, senior instructor of mathematics and director of the SCAMP program. “For over 25 years, the SCAMP program has welcomed entering minority freshmen into its Summer Bridge Program, which provides a smooth transition for students from high school to college. This multifaceted program is sponsored by the Office of Multicultural Student Programs and Services and is a subset of the SPECTRA Program at the College.”

“SCAMP’s support of undergraduate research [at CofC] has grown from three students in 2001 to 17 students in 2018,” says Agrest, noting that three of the students in 2018 had their research published. “The success of the SCAMP research program has been under-girded by strong support from the National Science Foundation, School of Sciences and Mathematics, the Undergraduate Research and Creative Activities Program and other national competitive programs.” 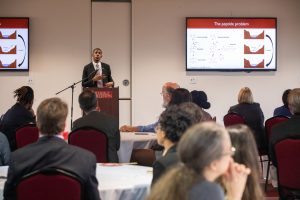 The breadth of research undertaken by SCAMP students and their faculty mentors was on display at the banquet, where seven students presented their summer undergraduate research on topics ranging from the “Mathematical and Numerical Modeling of Blood Flow: A Computational Study of Left Ventricular Assist Device” to “Synaptic Reorganization after Peripheral Nerve Injury.”

SCAMP Vice President Jabbarrius Ervin, a senior majoring in chemistry, was among those students to present research.

“It’s definitely made a difference for me,” says Ervin, whose research topic focused on the characterization of prebiotic peptide mixtures through a specific form of mass spectroscopy. “I feel like it made me all the connections that I needed. The research I’m presenting at the banquet, I wouldn’t have done it without Professor Agrest.”

SCAMP President Kassidy Sullivan, a senior majoring in biology with a minor in biomedical physics, agrees the program has been instrumental in helping her academically and professionally. More importantly, Sullivan says it has made her appreciate the guidance she’s received, something she hopes to pay forward.

“It has made me really realize the importance of giving back to my community because I had someone come down to me as a minority and help me develop into this STEM field and connect me with these resources,” says Sullivan. “So I know once I graduate from the College, I’m going to do the same thing and give back to other minorities and underrepresented groups.”

Both Ervin and Sullivan are currently applying to medical school, and they say SCAMP has played a huge role in getting them ready for that process.

“The things that Professor Agrest has shown us and taught us along the way has definitely made our applications competitive – and our resumés are great, all because of this program,” says Sullivan. “We’re very grateful for it.”