President Hsu Inauguration a Moment of Tradition, Transformation at CofC

Forty years ago Andrew T. Hsu came to the United States with $26 in his pocket, a little nerve and a lot of hope. On Friday, Oct. 25, 2019, under a warm autumn sky, Hsu officially became the 23rd president of the College of Charleston, as a crowd of more than 600 academic colleagues, elected officials, students, faculty, staff and community members looked on from the institution’s iconic Cistern Yard. 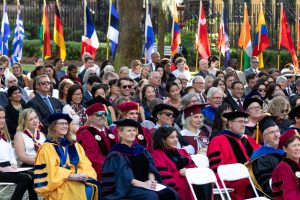 “Today as I look to the future, I cannot help but be reminded of my past,” said Hsu, who grew up in China amid the turmoil of the Cultural Revolution, his education threatened because of the political unrest. “I came to America dreaming of opportunity. I came full of hope and full of optimism. For me, my American education was what transformed my life. Because of my education, I am living my American dream.”

The inauguration celebration focused on themes of tradition and transformation with an investiture ceremony where Hsu traded the gold and blue robes of his doctoral alma mater the Georgia Institute of Technology for the maroon and black robes of the College. Speakers including College of Charleston Board of Trustees Chair David Hay ’81, Charleston Mayor John Tecklenburg, Speaker of the Faculty Simon Lewis, Chair of the Staff Advisory Committee to the President Melantha Ardrey ’02, and Rafael L. Bras, provost of the Georgia Institute of Technology, congratulated Hsu on his official installation at the helm of the university.

E. Gordon Gee, president of West Virginia University, who began mentoring Hsu as an American Council on Education fellow at The Ohio State University a decade ago, offered some pragmatic advice.

“To construct a successful presidency, you must fuse three materials: Thick skin, nerves like sewer pipes, and a good sense of humor,” joked Gee, who has served as university president at the University of Colorado, Brown University, Vanderbilt University and The Ohio State University. “That means accepting that criticism is part and parcel of leadership. Some criticism can be constructive, showing you how to move forward. But never let mindless criticism occupy space in your own mental landscape.” 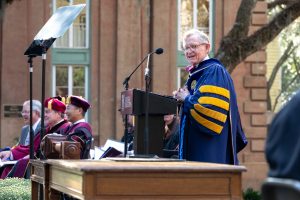 E. Gordon Gee, president of West Virginia University and a mentor to President Hsu speaks during the ceremony.

And that kind of determination, with a little levity, is how Hsu said he intends to guide the College toward its next chapter.

“I want to challenge our entire College community and our city and state leaders to imagine who and what we can be if we only dare to dream big and are willing to take risks,” he said. “We can be anything we want, but we cannot choose to do everything we want. Wise and bold choices will have to be made – sometimes very difficult ones. But all of it will be in service to a greater good: A College of Charleston that provides one of the best educations anywhere in the world.”

The moment is one that faculty took in with anticipation and optimism.

“It was a lovely ceremony,” said Sarah Owens, director of the First-Year Experience and professor of Hispanic studies. “I really like that the president wants to keep with the tradition of the liberal arts, but that he is also realistic about the things that we have to do to keep the College alive and vibrant.” 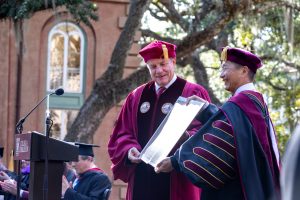 Board of Trustees Chair David Hay presents President Hsu with the College’s charter.

“I’m really looking forward to what he brings – not only with his vision, but the openness and the clarity he has brought to the process of governing the College,” said Levine. “He is letting us know how things are going and also being open to what we are saying and letting us help to discover and define the direction that we are going to be going in.”

Biology professor Mark Lazzaro said he came to the inauguration to learn about Hsu’s vision statement.

Intrigued by the pomp and circumstance of the event, small groups of students dotted the outskirts of Cistern Yard taking in the scene with curiosity and admiration.

“It’s an event that doesn’t happen that often,” said Lucas Licaj, a freshman majoring in biochemistry, adding, “I think he’ll take us to a bright future.”

For sophomore Vi Truong, a first-generation American whose parents immigrated from Vietnam, Hsu’s personal and professional journeys are inspiring.

“I was just sitting there smiling the whole time – he’s just so motivating,” said Truong, a biology major. “It pushes me to work harder, being a first-generation student as well and following in his footsteps as well as my parents. It’s a great thing to witness.”