It’s not the most frequented corner of campus these days, but there was a time when most of Charleston would eventually end up there. And – while visitors today might notice a mysterious echo or a sudden chill in their bones – in those days nobody made it out alive. Although, to be fair, they were dead when they got there.

Today the headquarters for the College of Charleston’s Facilities Management, 133 Calhoun St. once served as a casket factory, part of the one-stop-shop for all things death that consumed most of the Calhoun Street–Burns Lane block. Consisting of a mortuary, a coffin-storage facility, greenhouses, stables and the casket factory (and, randomly, a tropical fish business), the compound was owned and operated by J.M. Connelley Co., Charleston’s leader in funeral services from 1886 until 1979. 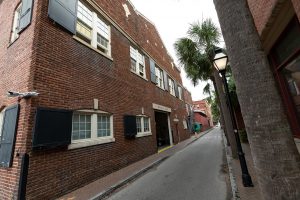 Now home to the College’s Facilities Management, the Physical Plant building between Calhoun Street and Burns Lane was originally built as a coffin factory. (Photo by Heather Moran)

Originally dealing in the business of pianos, organs and sewing machines, Connelley’s got into the funeral trade when the owner, Jesse Mercer Connelley, bought the Knights of Columbus building at 143 Calhoun and the burial business that was operating out of its basement.

In 1894, Connelley built a Romanesque three-story funeral home at 309 Meeting St., which contained a chapel, reception rooms, casket showrooms and a preparation room – all magnificently furnished with rugs, pedestals and catafalques. He then continued to purchase nearby properties, including the greenhouses at 311–313 Meeting, where he grew flowers for his funeral arrangements; the stables that housed South Carolina’s first horse-drawn covered wagon hearses; and the casket factory, which was described in a 1903 brochure as “a large and commodious factory with modern wood-working machinery, tools and implements for the manufacture of a high grade of cloth-covered caskets and polished outside oak and chestnut cases.”

“His biggest opposition came from other undertakers who saw in these ‘modern’ undertaking procedures an economic threat, a fear that proved to be justified,” says a 1979 article about Connelley that appeared in The Evening Post.

Indeed, at least in Charleston, it’s safe to say that Connelley’s, having perfected what the article calls “the fine art of burial,” had a monopoly on the dead. The company was incorporated in 1902, and was considered the largest and most complete company of its kind in the South.

In 1916, the younger Connelley created the Auto Livery Company, putting into service the first motorized hearses and funeral limousines in the state. The fleet included two funeral coaches, six limousines, a utility car and an ambulance. He performed the first automobile funeral service in Charleston and – in 1926 – made another first in the city when he replaced its old column hearses with the new limousine casket coaches. In 1947, it was also the first mortuary in the country to ship a body out by aircraft.

With the death of A. Chambliss Connelley in 1957 and the subsequent death of the new owner in 1978, the company met its own demise in 1979, making the front page of The Evening Post with the headline: “Mortuary License No. 1 Retired.”

Just like that, Connelley’s was dead – the buildings’ bones the only relics of their macabre origins.

While the property that had been home to the casket factory – which Connelley’s had closed and retrofitted for other purposes in 1931 – had already been purchased by the College of Charleston Board of Trustees in 1974, the memories of polished outside oak and chestnut cases slowly died as each of the properties were passed on to new business, taking on new lives.

Indeed, despite reports of the HVAC Shop occasionally smelling of embalming fluids, the building is alive and well serving as headquarters for Facilities Management: The once commodious factory filled with wood-working machinery and tools is now filled with all the machinery, tools and staff that make up the Carpentry Shop, Electrical Shop, Maintenance Shop, Paint Shop and Plumbing Shop, to name a few.

While it will always be one of Connelley’s old haunts, this space once dedicated to death is reborn and revived as a space dedicated to life at CofC.

Featured image: The interior of the Connelley casket factory. (Photo from the Collections of the S.C. Historical Society)