When Giovanna De Luca first moved to Charleston, she realized just how privileged she’d been all her life living in Naples, Italy, and in New York City. 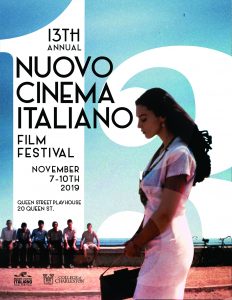 Actually, she didn’t just think about it: She did it.

Now in its 13th year, the four-day Nuovo Cinema Italiano Film Festival (NCIFF) opens at the Queen Street Playhouse, 20 Queen St., with an evening screening and Italian food on Thursday, Nov. 7, 2019. The festival runs through Nov. 10.

Celebrating contemporary Italian cinema and culture with film screenings, conversations with filmmakers and special events, NCIFF presents the most artistically significant works of contemporary Italian cinema, from both established and emerging directors. The festival hosts directors, actors and screenwriters each year, offering audiences a chance to interact directly with the filmmakers behind the work on display.

In fact, since its creation, NCIFF has grown into the premiere event of its kind in the Southeast, promoting Italian art, language and culture.

“The festival is the biggest Italian event in South Carolina and is heavily anticipated by the community interested in world culture,” says De Luca, who serves as the artistic director of the festival. “It brings a lot of visibility to the College of Charleston, not only in Charleston but also in America, because it is the biggest Italian film festivals on a campus.”

Largely supported by the College of Charleston, it is also pretty big among CofC students.

“We have around 60 students each year who volunteer to help us on location and we have interns from different departments working with us on the organization of the festival. The Film Studies Program students are in charge of video interviewing our guests and putting together material of our events for advertisement,” says De Luca. “The students are exposed to a ‘real’ film festival experience with a red carpet and Q&A sessions with filmmakers, actors and screenwriters from Italy. And, because the festival focuses on new Italian cinema and proposes a variety of films, students have the possibility to understand what is happening in Italy at the moment through the films.”

De Luca recalls that one student reached out her to tell her how big NCIFF’s impact was on her.

“She said that attending NCIFF was an eye-opening experience as she had a stereotyped image of Italy,” says De Luca. “Thanks to the festival she had become aware of this and decided to continue her career in social Italian studies.” 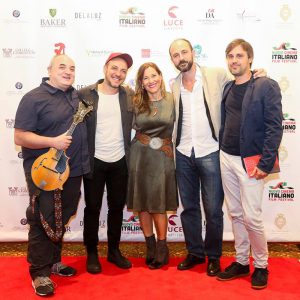 This year’s festival is bound to be impactful, too. It opens with an homage to the Italian cinematic tradition of “comedy Italian style” with the U.S. premiere of Do Not Stop Me Now, starring Paola Cortellesi, a celebrated Italian comedian. Also on tap are Paolo Virzì’s Magic Nights, a sour comedy about the hopes and disappointments of three young screenwriters in the early 1990s and Claudio Giovannesi’s Pirahnas, winner for best screenplay at the 2019 Berlin Film Festival and a compelling examination of the junior mafia in Naples.

“This is the second year we have a focus on Neapolitan cinema. In the past 10 years, Neapolitan cinema has produced some of the best films in Italy thanks to big economic and educational incentives in cinema production,” says De Luca. “Also, like every year, this year we will screen two films with an Italian Jewish theme. We will also screen a film about the current issue of migration in Italy.”

A full schedule of film screenings and special events is available on the NCIFF website.

All movies are in Italian with English subtitles. And, each year, NCIFF assembles an independent jury of film experts to evaluate the offerings and decide on a winner. The jury prize is awarded at a ceremony following the final screening on Sunday, Nov. 10, 2019.

Individual tickets are $10 per screening and are available at nuovocinemaitaliano.com and at the box office one hour prior to the screening.

NCIFF receives critical support from the College of Charleston, local and international businesses and nonprofit organizations, and individual donors.

Featured image: Giovanna De Luca, far left, on stage with actors for a Q&A session following a screening that the 2018 NCIFF Festival.