The Association for the Study of African American Life and History (ASALH) awarded Bernard Powers, professor emeritus of history and director of the College of Charleston’s Center for the Study of Slavery in Charleston, the prestigious Carter Godwin Woodson Scholars Medallion at its annual meeting and conference in Charleston in October 2019. 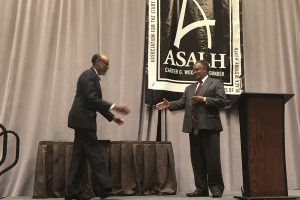 Established in 1993, the Woodson Scholars Medallion is presented annually to a scholar whose career is distinguished through at least a decade of research, writing and activism in the field of African American life and history. The person selected must be a trained historian and an active participant in the scholarly work of the ASALH.

Powers earned M.A. and Ph.D. degrees in American history at Northwestern University. He has been extensively involved in public history and has served as a consultant for historic sites. He has appeared in documentary films, including recently the PBS production, African Americans: Many Rivers to Cross and Emanuel: The Untold Story of the Victims and Survivors of the Charleston Church Shooting. He has presented papers at conferences and reviewed books and manuscripts for journals and presses.

His work appears in book chapters and in scholarly and popular periodicals. He edited the 1999 ASALH Black History Month Kit entitled “The Legacy of African American Leadership for the Present and the Future.” He also wrote a book chapter in 2015 titled “Churches as Places of History: The Case of Nineteenth Century Charleston, South Carolina” in Interpreting African American History and Culture at Museums and Historic Sites. Powers is the author of Black Charlestonians: A Social History 1822–1885 (1994), a Choice Magazine Outstanding Academic Book for 1995. He was an associate editor of the Encyclopedia of South Carolina (2006). Most recently he co-authored We Are Charleston: Tragedy and Triumph at Mother Emanuel (2016). His current research examines African Methodism in South Carolina.

Clearly, Powers demonstrates the dedication and commitment to African American history that is required of a Woodson Scholar Medallion recipient.