The American Revolution tends to get overshadowed by the Civil War, the deadliest conflict in U.S. history, which has resulted in myths and inaccuracies.

Erick Nason, a self-proclaimed “history nut,” and commander of the 2nd South Carolina Regiment, 1775-1780, finds himself correcting these inaccuracies when he participates in reenactments across the Palmetto State.

“When spectators come to an event, they just don’t hear about the history, they see it, they feel it, they smell it and can touch it,” says Nason. “They see how the soldiers and their families lived while on the march or in camp. They see how they slept and how they cooked their meals. We provide demonstrations on laundry, field medicines and soldier life.” 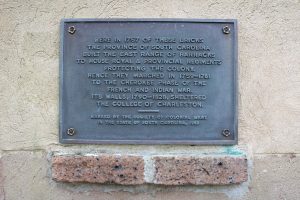 Two bricks on the corner of Towell Library are all that remain of the barracks originally built to house royal and provincial regiments in 1757.  During the Revolutionary War, that structure housed prisoners of war on the College of Charleston campus.

It’s the immersive nature of reenactments that makes history come alive. And on Saturday, Nov. 9, 2019, the history of the American Revolutionary War in Charleston will come to life on Cistern Yard at the College of Charleston campus from 9 a.m. to 5 p.m. The 2nd South Carolina Regiment, 1775-1780, will reenact scenes from the American Revolution, and highlight the little-known fact that the College served as a prisoner of war camp for American prisoners during much of the conflict. Following the 1780 siege and surrender of the city, 6,000 troops and their officers were captured. It was the largest capture of American prison­ers-of-war by a foreign power until World War II. The British were overwhelmed and struggled to feed and house the prisoners. Some were kept in the rustic barracks, while others were sent to the infamous disease-ridden prison hulks in Charleston Harbor.

The College was founded in 1770 during this tumultuous time, but because of the war, the institution didn’t start holding classes until 1785. Some of the College’s earliest classes were held in buildings that had been prisons only a few years earlier. While all that remains of those original barracks are two bricks on the corner of Towell Library, the struggles of the U.S. soldiers (and their families) imprisoned on this site were part of the larger struggle for our nation’s independence.

Ben Schaffer ’15, adjunct history professor at the College who helped organize the event, felt the College’s pending 250th anniversary was the perfect time to bring this story to life.

Schaffer, who majored in history at the College, started participating in reenactments soon after he saw the movie The Patriot. He was 10 years old and immediately hooked on the power of making history tangible to modern audiences.

The event, which is free and open to the public, is sponsored by the Department of History and the School of Humanities and Social Sciences.

Featured image: Adjunct history professor Ben Schaffer, dressed in a period uniform for the 2nd South Carolina Regiment, stands near the location of barracks that housed prisoners of war during the American Revolution on the College of Charleston campus.