Donor is Passionate About Italian Studies

Gloria Friedgen brings a lot to the classroom. Besides an upbeat energy and a contagious love of learning, the fifth-generation Italian American brings a perspective that many of her classmates have never been exposed to.

“I’ll bring pasta sometimes, and once I even brought my three-year-old grandson,” laughs Friedgen, a former high school biology teacher and adjunct faculty member at the University of Maryland (where her husband, Ralph Friedgen, was the head football coach for 10 years) who has been auditing classes in the College of Charleston Italian Studies Program for three years. “I’ve been in the classroom setting for a long time, but it never gets old. It’s just fun being in a class, being around young people and being exposed to their energy.”

But, according to Mike Maher, it’s Friedgen’s energy that is so refreshing. 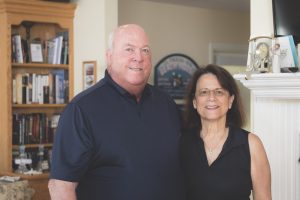 “She is a pleasure to have in class,” says the assistant professor in the Department of French, Francophone, and Italian Studies, who has taught several of the advanced-level classes Friedgen has audited, including literature, composition and culture courses. “She is a super great influence. She brings the energy up and is always ready to go. Whatever it is, she’s up for it. She’s comfortable with everyone and is very much adored by the students.”

That may be so, but she’s also a dedicated student who takes her studies seriously, always taking the tests and completing the assignments  – something that is not lost on her classmates.

“She is really enthusiastic about it – she wants to be there,” says Kelsey Baum ’19, who as an Italian studies minor sat next to Friedgen in their Italian Food and Culture course last year. “She brings a different perspective and a lot of knowledge about language and culture. She studies on her own time, even though she’s not being graded. I’ve learned from her how much more you can learn when you aren’t just doing it for the grade. Her enthusiasm is definitely contagious. She just has a passion for it.”

She’s also a very active member of the Italian Studies Program. She is heavily involved in the Italian Club, helping with its organization, and even started an Italian folk dancing group, teaching its members the tarantella – an Italian folk dance that was once used as an emergency antidote to the poisonous venom from a spider bite.

“She has become a fixture in the program, and she really enhances every aspect of the students’ experience,” says Maher. “There are only 20 to 30 advanced students in the program, so it’s a tight knit group, and everyone knows Gloria.” 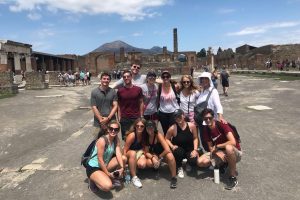 Kelsey Baum ’19, along with other CofC students, on a visit to  Pompeii during an Italian studies study abroad trip in 2018.

“Because the department is small, and they embrace culture and tradition, you can really get to know each other in a really special way,” says Friedgen. “It’s such a good department. The professors have really advocated for a supportive environment, so the kids feel free to express themselves. The temperament of the teachers is conducive to learning and to expression, so I was moved to support this program.”

And so, in December 2017, she and her husband created the Friedgen Family Italian Study Abroad Endowed Scholarship to honor the Italian studies faculty, especially Maher and Marinella Griffith, an adjunct faculty member. The scholarship is awarded to rising juniors or seniors who minor in Italian studies and wish to study abroad in Italy.

“Gloria was very specific in who is eligible for the scholarship, so we sat down and came up with the scholarship as the best way to enhance students’ experience,” says Maher, noting that one unique requirement of the scholarship recipients is to submit documents at the beginning of the semester following  their study abroad experience, including a testimonial of how the experience benefited their personal growth.

“I think everyone should get to experience the world, and I know that you have to be in a place – immersed in the culture, the traditions, the people and the food – to really appreciate it,” she says. “I hope this helps expose students to that, to widen their horizons.”

It certainly did so for Baum, one of the first three recipients awarded the scholarship in May 2018, who traveled to the coastal town of Sorrento as part of a CofC study abroad last summer.

“The entire experience was so inspiring, so eye opening,” says Baum, explaining that the immersion program involved coursework taught by Giovanna De Luca, associate professor of Italian studies, and excursions to Bologna, Naples, Pompeii and the Amalfi Coast. “We got to interact a lot with the locals, and we really got outside of our own bubbles. It was life changing. I am so grateful for the experience, and for Gloria.”

As is Maher: “The scholarship is really making an impact on our students. It’s the first time I’ve actually seen the direct impact of giving back. It’s really inspiring.”

Indeed, Friedgen has been an inspiration to the entire program.

As one of her classmates said, “When I grow up, I want to be like Gloria Friedgen.”

Featured image: CofC students get a great view of the Bay of Naples from their classroom at the Sant’Anna Institute in Sorrento.