Beer Competition Coming to a Head

It’s a pretty exciting class project to get to make your own beer, as College of Charleston students have done in the Chemistry of Alcohol since the class began three years ago. It’s even more exciting when your beer has the chance to become the College’s 250th anniversary brew.

“We could not be more excited to potentially be a part of CofC’s history,” says student Alex Huss.

Student Ian McCauley adds: “It would be a great honor to be picked to represent the College.” 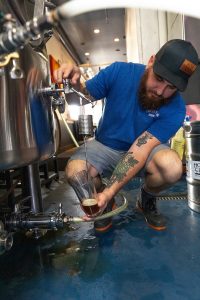 With the help of alumnus Chris Brown ’05, owner of Holy City Brewing, along with class instructors Mike Cohen (hospitality and tourism management) and Jason Overby (chemistry), three pairs of students concocted the recipes that are vying for the anniversary rights. All students who enroll in the Chemistry of Alcohol class must be 21. The taste-testing competition to select the winning brew runs Nov. 14–24, 2019, at Holy City Brewing’s downtown Charleston location, Baker & Brewer, at 94 Stuart St. An event to kickoff the competition will be held at Baker & Brewer from 5-8 p.m. this Thursday, Nov. 14. Beer enthusiasts can purchase a flight of the three beers and vote for their favorite. The beer with the most votes will be selected as the College’s 250th anniversary brew. The College will celebrate the 250th anniversary of its founding in 2020.

The choices are a Belgian amber ale by Ashley Blackwell and Devin Sharp, a dark wit by Mason Huebsch and McCauley, and a pale ale by Huss and Nick Larson.

“They all had a different take on what they wanted to brew and came ready with ideas,” says Brown. “I’m glad that we were able to tie the class to the 250th beer. It’s very cool that students get to be involved in it all.”

Most importantly, the students learned a great deal.

“I never realized what went into brewing a beer,” says Huss, a senior biology major who went for a pale ale because of its wide appeal. “All of the brewers at Holy City showed us the ropes of brewing a beer on the commercial scale, which was a lot. The pH, specific gravity or how much sugar is in the beer, temperature and sterility are so important in making a good tasting beer.”

The process included regular student visits to Holy City Brewing to take gravity and temperature readings while their beer was fermenting.

“Our brew day took a lot longer than we excepted due to all the wheat we used, but Chris Brown and the other brewers at Holy City were very helpful with every step of the process,” says McCauley, also a senior biology major. “I’m thankful to have the opportunity to work with them.”

McCauley was surprised by the complex nature of brewing beer on a commercial scale.

“All the technology and thought that goes into making a beer is mind blowing,” he says. “All the different pipes that connect to the machines around the brewery took some time to understand, but I think eventually I got the gist of everything. To make a great beer requires precision, and Chris and the other brewers at Holy City are very good at what they do.”

And the craft sure has come a long way since the College was founded in 1770. Thankfully, the students didn’t try to mimic what Charleston residents drank back then – a crudely made brew with pine needles and pine sap included in the stein.

Says Cohen: “That must have been a gagful to get down.”

Featured image: Student Devin Sharp cleans a vat after brewing a Belgian amber ale to be considered in a competition to select the College’s 250th anniversary beer.