Lecture to Explore Ancestries of Enslavement

The fascination with researching our ancestry has spiked in the last few years with improved access to at-home DNA kits. Suddenly, with $75 and a sample of saliva anyone can trace their lineage and connect with relatives across the world. The results are anti-climactic for some, but for others, long buried family secrets are revealed, and lives are forever changed. 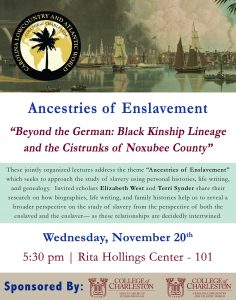 Elizabeth West, professor of English at Georgia State University, and Terri Snyder, professor of American studies at California State University, Fullerton, will discuss how their research seeks to approach the study of slavery using personal histories, life writing and genealogy in a lecture titled “Ancestries of Enslavement.” The lecture, which is free and open to the public, will be held at 5:30 p.m. on Wednesday, Nov. 20, 2019, in room 101 of the Rita Liddy Hollings Science Center.

West and Snyder will discuss how their respective research has revealed a broader perspective on the study of slavery, from both the enslaved and the enslaver. Kameelah Martin, director of the College’s African American Studies Program, says the study of genealogy isn’t considered an academic pursuit, but research like this opens up a new way of studying slavery. The lecture title shares its name with Martin’s undergraduate class Ancestries of Enslavement, where students examine the writing of Zora Neale Hurston and have the opportunity to speak with descendants of enslaved people.

For West, her research began as a simple project of compiling family genealogical information like oral stories, pictures, family trees and names. The more she learned, the more she wanted to know.

“My quest to fill in the blanks led me to a 19th century ancestor named Francis, in Marion County Georgia, and then to the genealogical line of a Swiss German immigrant, Heinrich, who had arrived in Charleston in 1746,” says West. “Francis was enslaved by Heinrich’s 3rd generation descendant, Jacob Sistrunk, and her story of forced migration would become tied to Jacob’s migrations from Georgia into Mississippi less than a decade before the Civil War.”

Snyder’s research focused on the biography of an early American family.

“My study begins on the eastern shore of Virginia in 1703, with the marriage of a free woman of color to an enslaved man. The couple had seven children, and my book follows the life stories of those children as they and their descendants mature and migrate across and beyond the Atlantic seaboard,” says Snyder. “I’m particularly interested in using this family history to understand the ancestries of enslavement as well as to chart the nature of race, law and freedom in and beyond early America.”

The lecture is sponsored by the African American Studies Program and the Carolina Lowcountry and Atlantic World Program.