CofC Pep Band Drummer to Audition for ‘America’s Got Talent’

Pride, passion and percussion only scrape the surface to describe William “Willy” Frasier, better known to the greater Charleston area as “Willy The Hip-Hop Drummer.”

You can find Frasier all around town sharing his love of performance with the community. This past summer, Frasier wrapped up his contract with the Charleston RiverDogs to perform his own freestyle content while excited fans awaited to file in the gates to the baseball games at Joseph P. Riley, Jr. Park. On Saturdays from 10 a.m. to 3 p.m., he’s at Marion Square in the heart of downtown Charleston working with his independent breakdancing group, The Break Circuit, showcasing his own take on “WÆ-Work” and entertaining crowds of people, both tourists and natives alike.

A little closer to home, basketball season puts Frasier and his drum set in the bleachers of TD Arena cranking out beats for CofC’s pep band Chucktown Sound during College of Charleston basketball games.

“It’s just one big family where we like to put on a show and get people hyped up for basketball,” remarks Frasier, beaming. “They’re the best band family.” 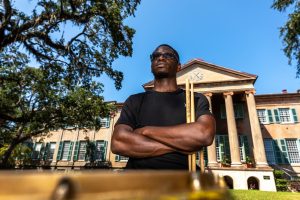 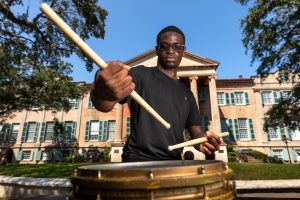 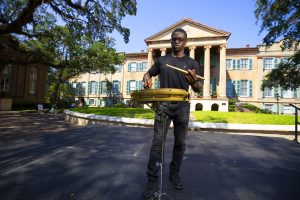 But Frasier’s talents aren’t only confined to the Lowcountry. His hard work and brilliant flair for performance has caught the eye of producers for the television show America’s Got Talent. His application and video audition earned him a guaranteed slot to perform for the show’s open auditions in New York this Saturday, Nov. 23, 2019.

Planting the seeds of a lifelong dream when you’re a toddler may seem early to some, but for Frasier a visit to church when he was two years old was all it took to ignite his passion for drumming. Watching the praise band drummer struck a chord in him and it didn’t take long for the young boy to build his own drum set out of pots, pans and anything else that could hold a beat. Growing up, not only did Frasier play in his middle school band, but he also participated in West Ashley High School’s marching band, playing his snare in the stands of every football game and marching every halftime show.

Looking back, Frasier remarks, “Being in marching band helped me focus on my craft and got me even more used to playing in front of large groups of people.”

Frasier started experimenting with dance and drumming when he was 10. He describes the feeling of being able to put both of his interests together into one art as “freeing.” Each performance is unique and completely freestyled with no routine prepared.

“I get the tempo set inside me and really just feel the spirit of the music,” says Frasier.

Frasier, who was previously enrolled as an early childhood education major his freshman year, wants to use his passion for music and teaching to help young kids.

“Being a mentor to people, that’s really all I want to do,” he says. To him, teaching means helping people understand a topic or seeing a kid perform his own moves.

This is a lot for a young adult to keep up with. So, how does Frasier keep himself going?

“Honestly, it is a struggle and my uncle, my biggest hype man, died two days after I first told him I was giving up music,” says Frasier, noting that after such a profound and personal loss, he reconsidered leaving music behind. “College is about finding yourself … seeing what you want to be. Don’t stop doing what you love to do. It’s important to push even further.”

Claire Grulick is in her senior year at the College of Charleston studying English and Linguistics. She is the editor-in-chief for Her Campus and hopes to pursue a career in editorial work.