Have a Ball With Faculty and Staff Bowling League 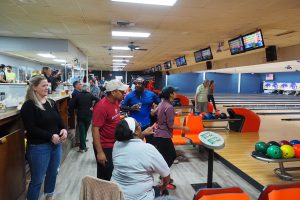 The fall season of the College of Charleston Faculty and Staff Bowling League just ended, and once again it was the Alley Cats who came out on top, winning their sixth championship.

“Friendship!” says captain Jennifer Misako Stevens, administrative coordinator for the Division of Business Affairs. “We have a really tight-knit group. I think the biggest key to our success is that we don’t take ourselves too seriously. We go out there week after week and just enjoy each other’s company.”

Another key is that even those who don’t play show up to root the others on. Each team can have up to 12 players, but only four compete. 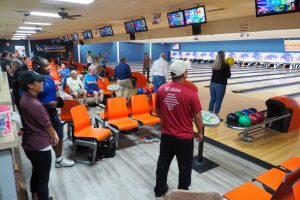 “Usually we have a fanbase each week,” says Stevens. “The energy makes a big difference.”

The College’s Campus Recreation Services (CRS) started the league in 2011 as a way for faculty and staff to get out and have a little fun together. While there have been as many 11 teams in the league in years past, this fall 2019 season seven teams competed at Ashley Bowling Lanes in West Ashley every Friday evening for eight weeks. A handicap system helps keep things equitable in the lanes, and employees’ significant others help fill out rosters – and keep the peace at home.

“Before this program started, I was looking at what possible activities to direct for the faculty and staff,” says CRS Director Gene Sessoms. “I knew that it would work better if they could participate with their significant others. I settled on bowling.”

It’s also a great way to get to know staffers and faculty you might not usually interact with. 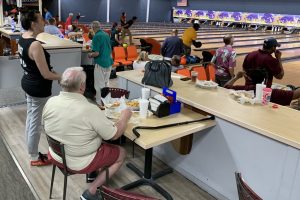 “It’s so nice to meet people you wouldn’t normally see on campus,” says Darcie Goodwin, director of advancement communications who played on the Division of Marketing and Communications team. “We have some serious bowlers, but they welcome others like me who are just trying to stay out of the gutter.”

But even the serious bowlers aren’t that serious: The champion team’s golden glove (pictured above), is a nod to the “Infinity Gauntlet” from The Avengers: “Leading up to this season, we talked about how we needed to get one last stone – the soul stone – to ‘collect’ all six and complete the infinity gauntlet,” says Stevens. “So it’s a bit of an inside/team joke.”

All joking aside, everyone can agree that winning isn’t the point of bowling with the Faculty and Staff Bowling League.

“The league itself promotes camaraderie and friendly competition. Some of the greatest relationships I’ve formed are with colleagues I met through the bowling league,” says Stevens. “And, honestly, it’s just a fun way to spend a Friday evening.”

Want to spend some Friday evenings with the Faculty and Staff Bowling League? Be on the lookout for registration details for the spring 2020 season in January/February!