Sometimes the biggest discoveries start from something small.

For two semesters, marine biology major Bailey Fallon worked in the College of Charleston’s Mace Brown Museum of Natural History. As a student volunteer, she spent most of her time in the museum’s prep lab doing tasks like cleaning dirt off fossils and piecing together small bones. 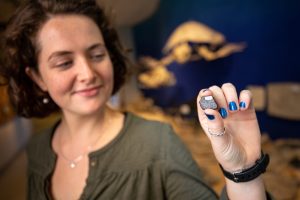 She loved the job, but was looking for something more. After telling Robert Boessenecker, adjunct faculty in the Department of Geology and Environmental Geosciences, that she wanted to do research, Boessenecker handed Fallon a small bone – a shell ‘ossicle’ of a leatherback sea turtle – and told her to find out more about it.

“First I measured it,” says Fallon. “Then I searched the entire database on leatherback ossicle fossils and attempted to identify which genus the fossil belonged to.”

After a lot of reading, searching and comparing it to other fossils, she concluded that this ossicle is about 5 million years old and that it probably belonged to Psephophorus, an extinct turtle that is likely an ancestor of the modern leatherback turtle (Dermochelys coriaceae). Research in hand, Boessenecker and Fallon determined that the fossil, which was collected near Santa Cruz, was the first record of a leatherback fossil from Northern California.

Boessenecker was impressed with Fallon’s research. 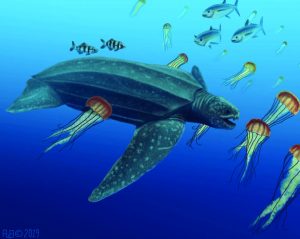 “Most of the work Bailey did was to become an expert on identifying fossil leatherbacks, becoming familiar with the existing published research on leatherbacks and describing the anatomy of the fossil,” he says. “I guided her as best I could and, in the end, she knows more about leatherbacks than I do and she has in turn taught me quite a bit about them.”

Boessenecker adds, “It was an absolute privilege to work with Bailey. She is highly capable, motivated and undaunted.”

The two compiled all of the research and published the results in the peer-reviewed journal PaleoBios.

“When [Boessenecker] first handed me this tiny fossil and told me that we could write an entire paper on it and have it published, it blew my mind,” says Fallon. “I loved the appeal of being able to publish as an undergraduate student. I know that is rare.”