The College of Charleston School of Sciences and Mathematics recently hosted an event, “Alumni in Medicine, Then and Now,” which included an unveiling ceremony and reception recognizing the contribution of alumni honorees, as well as a panel discussion of the history of the close relationship the College and the Medical University of South Carolina (MUSC) have enjoyed over the past two centuries.

Held in the Rita Liddy Hollings Science Center as part of the College’s Fall Alumni Weekend, the event was attended by CofC alumni in the medical profession, who came from all over the country to reunite with faculty members and meet with current CofC students who aspire to attend medical school.

The subsequent ceremony unveiled an honorary plaque of the donors who built the original Physicians Auditorium, including Dr. John Arthur Siegling ’28, as well as portraits of the building’s namesake Rita “Peatsy” Liddy Hollings ’57 and former CofC biology professor Harry Freeman ’43. A cocktail reception followed, with tours of the newly renovated building. 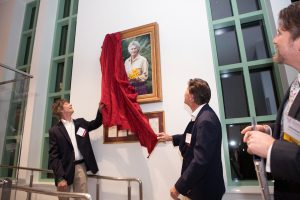 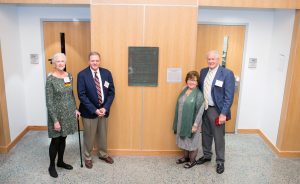 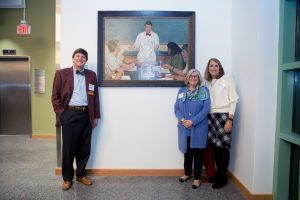 Members of the Freeman family pose with a newly hung portrait of Harry W. Freeman in the Rita Liddy Holings Science Center.

“The original Rita Liddy Hollings Science Center and Physicians Auditorium were built in 1972. The auditorium was demolished during the recent $65 million renovation of the Hollings Science Center and was replaced with the new modern auditorium that housed our panel today,” Sebastian van Delden, interim dean of the School of Sciences and Mathematics, said at the unveiling of the Physicians plaque. “The eight names listed on this plaque that once hung outside Physicians Auditorium were the facility’s original donors, and six of the eight were College of Charleston alumni.”

Upon the unveiling of Hollings’ portrait van Delden said, “Sixteen years after this building was dedicated, we are proud to permanently install a portrait of Rita ‘Peatsy’ Liddy Hollings. Peatsy was a tremendous supporter of her alma mater, and we can think of no better place to hang this beautiful portrait.”

And van Delden reflected on the impact Freeman continues to have on the College.

“While many of us did not have the chance to meet Dr. Harry Freeman, we are honored to have this portrait permanently in place to share his legacy with future generations. We selected this corner of the building because it is a favorite gathering space for students, and Dr. Freeman was known for his fondness for joining students in conversation and study,” he said. “It would be difficult to find a professor who has had more impact on students preparing for a career in medicine than Dr. Freeman. His dedication and concern for students was legendary.”