But an artistic message doesn’t have to be confined to a gallery. Two recent student-art projects prove that. Cecilia McGuinn painted a mural in the City Bistro dining hall. And Lisa Rosamond Thompson ’19 created a photography project that now resides in Marty’s Place, the College’s kosher dinning facility.

McGuinn, a junior majoring in psychology with a minor in linguistics, painted her mural for two and a half months over the summer before completing it in August. 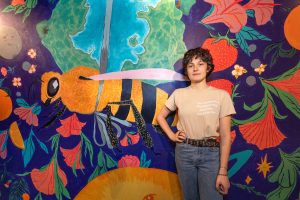 Cecilia McGuinn with her mural at City Bistro. (Photos by Heather Moran)

Although she did not exactly have a message in mind for her artwork, McGuinn does want those who take it in to walk away feeling inspired.

“I do a lot of my art just because it looks pretty. I just make things that I like to look at,” she laughs.

But McGuinn does hope this image, which depicts the Earth surrounded by colorful flowers with a bee at the center, says something about the environment and climate change.

“The mural is about how our planet can’t survive, you know?” she says. “If they go down, we’re going down with them.”

Thompson’s artwork at Marty’s Place has a different story to tell. Her photography doesn’t offer a warning, but rather a story of history.

Thompson’s photography project was created from her interest in both history and Jewish culture. She fell in love with the Jewish culture after taking a class at the College.

“I grew up Southern Baptist – and yeah, we went to church every Sunday, but the community aspect wasn’t there. I guess I was envious of that,” she says. “It just fascinated me that Jewish people from all over the world are so connected. And here in Charleston, the Jewish community is so strong.”

That interest sparked the idea for what would become the work now displayed in Marty’s Place.

“I tried to combine my love of Jewish studies to reflect how the College and Jewish history interconnect,” she says. 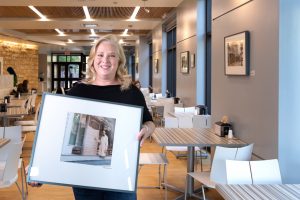 Lisa Thompson created a series of photographs for Marty’s Place.

Thompson gathered historical photographs from different places at the College, like Special Collections, and merged those images over modern photos of CofC buildings. The photos selected for Marty’s Place are largely picturesque images of the campus on a bright sunny day, like Randolph Hall and the Education Center, with aging, reddish-brown images of Jewish storefronts, such as Harold’s Cabin, superimposed over them.

In all, Thompson has three bachelor’s degrees and is currently working on a master’s degree in education. She finished her first bachelor’s degree while still on active duty in the Navy. She earned a second bachelor’s in history and a third in studio art along with a minor in Jewish studies from CofC earlier this year.

Finding a passion for photography after her career in the Navy has been life changing for Thompson, who works as a photographer under the name Lisa Rosamond.

“It opened me up to seeing things, to creating things in a different way,” she says. “I love that I can combine my two loves and create something that is historical and significant in history so that people can come and really see it.”

And while McGuinn, who also plays violin, says that she’s thrilled to have her first public mural on display for the world to take in, it’s the act of creating something that’s significant for her.

“I’d be a more nervous person if I weren’t getting it all out with art,” she says.

Kehinde Ojediran is a College of Charleston senior majoring in religious studies with a minor in Asian studies. Growing up in Chapin, South Carolina, she devotes most of her free time to writing.