Graduate Gets Ready for the Big Leagues

It is understandable why Griffin McLarty was excited to race across the stage at TD Arena to receive his diploma during the College of Charleston’s Winter Commencement ceremony last month. He has to get ready for his new job. 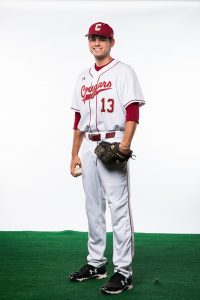 In June 2019, McLarty was drafted in the eighth round by the Baltimore Orioles in the Major League Baseball draft. After only a few years as a pitcher with the Cougars, McLarty’s name is already plastered all over the CofC record books. He is fifth on the all-time strikeouts list, fourth in all-time strikeouts per nine innings and second in single season strikeouts.

Even though McLarty was ready to make a jump to the professional leagues after three years with the Cougars, he did not want to balk on his college degree. After doing some research, he discovered that if he added a few more courses to his workload, he could graduate early.

This fall, he loaded his schedule and finished his degree in finance after only three and a half years of study. More impressively, he finishes his college career with a GPA almost double his 1.78 ERA.

“I came to CofC with two things in mind,” says McLarty. “I wanted to play baseball for as long as I can and I also wanted to earn a degree.”

Unlike many baseball players who leave college early to enter the MLB draft, McLarty knew that he wanted to complete his degree before he took the leap.

“It is interesting to see the different perspective of some players who finish their baseball career and could care less about going back to school to complete their degree,” says McLarty. “For me, I was fortunate enough to be in a situation where I knew I could finish school. It is something that is really important to me.”

Now that he has his College of Charleston degree in hand, the right hander can now fully concentrate on getting ready for spring training in March.