Financial Trailblazer Urges Graduates to ‘Do What You Love’

At first, Michelle “Mitsy” Mangum ’86 thought that College of Charleston President Andrew T. Hsu was joking when he asked her to speak at the 2019 Winter Commencement ceremony.

But she soon found out it was no joke.

“I received my invitation in the mail, which made it all a reality to me because my name was spelled correctly,” she says. 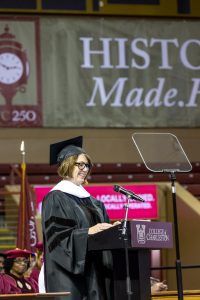 A native of West Columbia, South Carolina, Mangum excelled in both the classroom and on the courts as a member of the College of Charleston volleyball team.

Since her graduation from CofC, Mangum has become a financial trailblazer on Wall Street.

She was the first female domestic over-the-counter trader at EF Hutton. She later joined Smith Barney where she achieved the level of vice president and was the first female in the branch of 50 total advisors. Years later, Mangum achieved vice president status at Raymond James and was awarded President Council status. Currently, she serves as managing director and equity partner and sits on the Investment Committee of Lakeview Capital Partners.

She told the members of the graduating class on Saturday, Dec. 14, 2019, that her many years in business and finance taught her some valuable lessons.

“I have learned that through crisis comes clarity and clarity preceded success,” she said. “You have to get back up and fight another day.”

Mangum said that her time at the College of Charleston fine-tuned her skill set to “run with the bulls.” She admitted to the audience that she could have never done it without her friends. 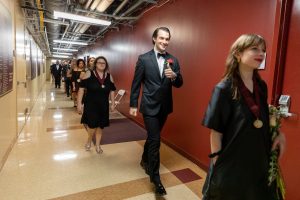 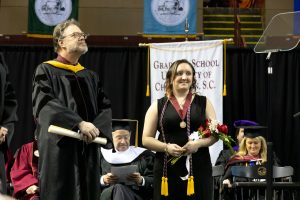 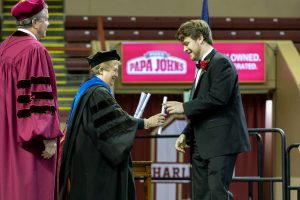 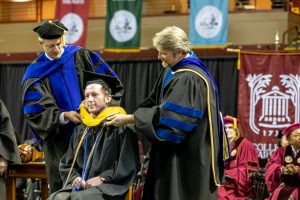 “Surround yourself with people who help you grow and make you feel valuable in all aspects of your life. In turn, you should do the same for them,” she said. “This combination will serve you well.”

Mangum urged the graduates to “do what you love, work hard at it and you will be rewarded.”

In addition to Mangum, the College of Charleston also presented an honorary degree to businessman William A. Finn during the ceremony. Finn currently serves as a director of Santee Cooper; director of the Seaman Corporation; treasurer of the SCETV Endowment; and as chairman of the Turning Leaf Project.

Over 400 graduates received their degrees during the commencement ceremony held in TD Arena.