Only three weeks into doing business in downtown Summerville, South Carolina, Danetra Richardson ’12 has the Lowcountry hooked on macarons, brownies and Nutella-stuffed cookies from her shop Swank Desserts. The pastry chef, however, has been working on this dream for much longer.

Richardson started Swank Desserts as an online business after graduating from the College of Charleston with a degree in hospitality and tourism management. Originally enrolled within the culinary arts school Johnson & Wales in Charlotte, Richardson discovered Charleston and the College while completing an externship through Johnson & Wales at Magnolias restaurant on East Bay Street. 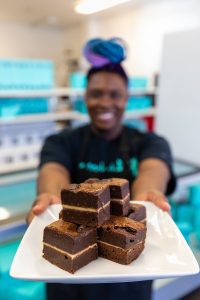 “I thought about finishing my degree in food and beverage management at Johnson & Wales,” Richard says, “but then I realized that I wanted something more well-rounded in case I wanted to leave the field.”

So, she transferred and began planning her future. As part of her capstone course at CofC, Richardson wrote a business plan for a dessert lounge in Charleston.

“That’s how Swank was born,” she explains. “The name stands for ‘sweets with a nightly kick.’”

For four years, Richardson built her brand as the go-to for creative wedding cakes, stunning desert displays and many Instagram-worthy sweets. The entrepreneur has been on the lookout for a brick-and-mortar location for quite some time, and finally found a space at 110 A South Cedar St. in Summerville. She’s hired four employees and is even thinking of expanding.

“Eventually I do want to open another storefront, but for now we just want to get acclimated to our new business model and get settled in Summerville,” says Richardson.

So far, Swank’s new spot is off to a great start. Within three weeks of opening, Swank is winning five-star reviews on Yelp, with comments like “Do yourself a solid favor and get over to the shop ASAP.”

“My favorite thing about being a pastry chef is how endless the possibilities are,” says Richardson. “We sell something different every day so our customers are never bored – and we’re never bored.”