Associate Professor of Geology Norman Levine was 10 when his parents took him on a vacation from Long Island, New York, to Northern California. Being in ’49er country, the budding geologist wanted to try his hand at gold panning, so he and his dad stopped by a local rock shop to pick up supplies.

“It’s a shame y’all can’t go on to the military base,” the man behind the counter said to them. “They just cut a road through a vein there, and it’s free picking.”

Levine’s eyes bulged as the clerk took out some samples customers had bartered for metal detectors and other equipment. Before becoming a college professor, his dad was in the military, and the next thing you know they were on the base collecting 25 pounds of gold ore, which Levine then cut up and used to trade for other geologic specimens at rock shows.

He also gave a piece about the size of a baseball to one of his cousins, who put it in the waterfall of his pool. Six months later, the waterfall stopped because an ounce and a half of pure gold – worth over $700 – had eroded out of the rock and clogged the filter.

“He wanted to know if I wanted to collect more rocks for him to put in his fountain,” says Levine with a laugh. “It became a standard running joke in our family for years.” 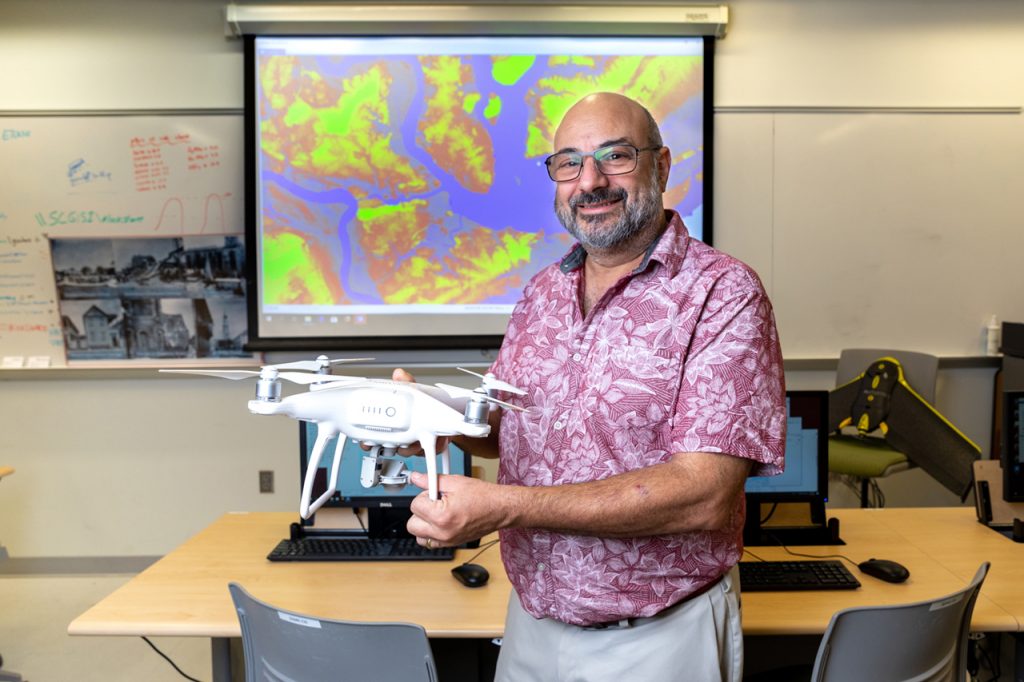 As director of the Lowcountry Hazards Center, Norman Levine uses a variety of technology to map and monitor geological trends including sea level rise and topographic changes. (Photos by Heather Moran)

Levine learned early on that geology just might pan out as a career, but, today, as director of the College’s Lowcountry Hazards Center, the value extends far beyond himself. Located on the second floor of the School of Sciences and Mathematics Building, the center is an interdisciplinary, multi-institution, multiagency collaborative effort that promotes research and outreach on multiple hazards and vulnerabilities in and around the Lowcountry.

“Charleston is the hazard capital of the East,” says Levine, sitting in the outer room of the two-room center. “That sounds terrible when you say it that way, but for what I do, I couldn’t ask for more. The only thing we’re missing are volcanoes, and we really don’t need one right now.”

Indeed, the city has its hands full dealing with all the flooding, which is the main concern of Levine and the students (both undergrads and master’s candidates) who work in the lab inputting and analyzing data into the Geographic Information System (GIS), getting real-world experience in the process. Topographic maps of the Lowcountry line the walls, along with charts and tables that illustrate the existential threat sea level rise presents.

“We’re actually seeing sea level rise at a faster rate than other places in the U.S. in part because of our topography and our bathymetry,” he says, referring to the sea floor. “The effect of how the Earth spins combined with the density and salinization changes of the Gulf Stream has caused it to shift its position and move more water upward.”

The most extreme prediction of sea level rise of eight feet by 2100 has “only” a 10 percent likelihood, but this “snorkel scenario,” to use geology humor, would completely inundate the Lowcountry. “If you were flying in a plane with a 10 percent possibility of crashing, would you take a plane or a car?” Levine asks.

As an applied geologist who specializes in environmental and sustainable geology, Levine takes an interdisciplinary approach to his courses and research, working with a number of other academic programs, like data science and archaeology. In fact, he was on the committees that helped form those two programs. And just this fall, he and fellow geology professor Leslie Sautter created a new minor in geospatial science starting next year that combines a number of different disciplines. 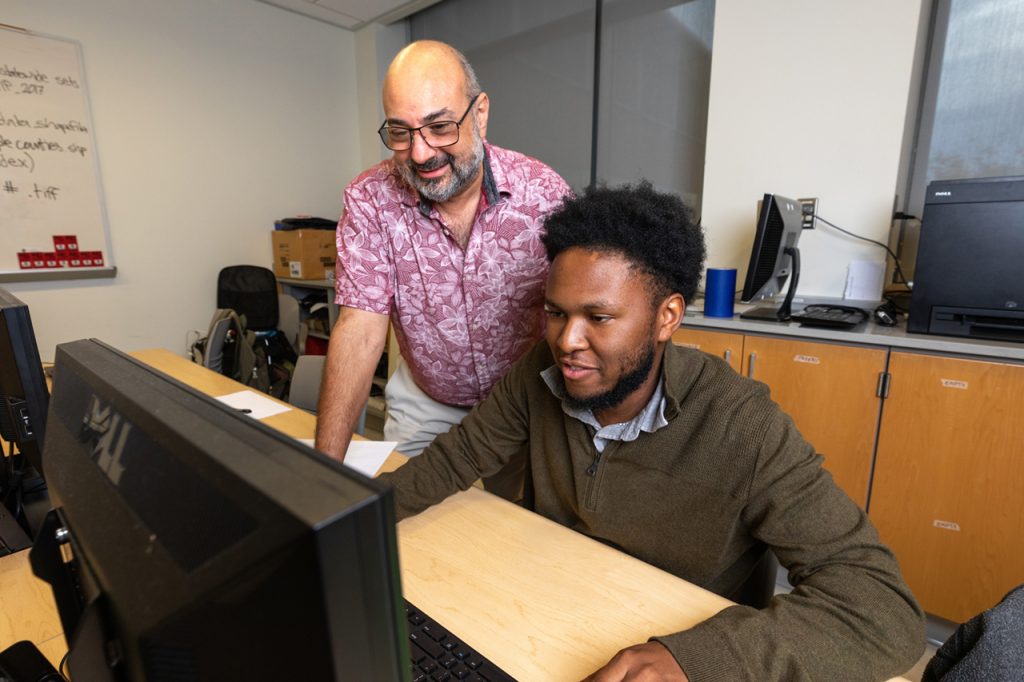 Levine engages students in a variety of experiential learning projects through his various academic and scientific roles.

“Dr. Levine teaches and involves students at all levels of experiential learning projects,” says Tim Callahan, professor and chair, of the Department of Geology and Environmental Geosciences. “A great contribution of Dr. Levine’s is his work delivering products to our partners and collaborators. Flooding, sea level rise, earthquakes and hazards in general do not follow geopolitical boundaries. Citizens, elected officials and municipal leaders all try to make data-driven decisions to the benefit of the public, and Dr. Levine has helped with that in many ways.”

That’s one reason why the Geological Society of America just made Levine a fellow of the society during its annual meeting in Phoenix this past September.

“It was one of the proudest days of my life,” he says of the prestigious recognition. “It was a true recognition by other geologists that what I do is important, that it makes a difference, and is considered the state-of-the-art practice and what should be done in geology.”

Growing up on the glacial sandbar that is the North Shore of Long Island, Levine has always been drawn to the subject and its applications. Both his parents were educators who encouraged him to explore his curiosities. When he was a graduate student at Indiana State University, he programmed the very first Sea Level Affecting Marshes model (SLAM) for the EPA in the late 1980s. And the gold ore he found at age 10 was nothing compared to what he did while working for Mobil during the summers while he was pursuing his doctorate at Purdue University. By recommending the company spend $22 million to deviate a well by 120 feet, they hit two extra feet of oil and gas. The company made the $22 million back in the first month.

In addition to working as a NASA climate change scientist since 1990, he is also a director of the South Carolina Earthquake Education and Preparedness program. But nothing he has done has been as personally rewarding as teaching, which he began doing as a graduate student and then at Bowling Green State University for eight years before coming to the College in 2003. He gets especially excited when he talks about former students going on to earn a Ph.D. and one even forging a path toward becoming an astronaut.

“Teaching is a passion and a joy,” says Levine. “The spark that is passed in the classroom to the students moves the needle of knowledge and understanding forward. My job is not to fill the minds of students with facts. It is to teach them to think, evaluate and create new understandings of the world around us. Teaching is about discovery, and knowing that you have helped someone see the world and chart a path forward is a feeling that cannot be surpassed.”