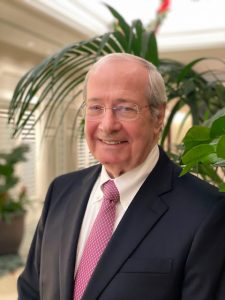 Finn has always focused on helping business students reach their full potential through personalized coaching – none more so than those in the Schottland Scholars program.

Established through an investment from Peter and Susan Schottland and Peter’s father, Stanley, the Schottland Scholars program connects highly motivated students to business and organizational leaders through skills development, mentorship, company tours and much more. The program also provides students with opportunities to build relationships with business leaders through a variety of professional and networking events throughout the year.

Impressed by the confident Schottland Scholars, Finn has enhanced the overall Schottland Scholar experience through donations of funds and time. He has regularly contributed to the Schottland Programs Endowment, including a gift that permanently named one of the 10 Schottland Scholars in honor of Carrie Messal, the program’s founding director. He has also taken part in the development of the program’s curriculum, coordination of site visits and connecting scholars with his C-suite level professional contacts.

RELATED: Learn more about Finn’s background and his selection to receive an honorary degree during the 2019 Winter Commencement ceremony.

While every student in the program is assigned a mentor, Finn usually serves as a second, supporting mentor.

“I find that a lot of the experiences I’ve had in my business career are meaningful to them,” he says.

To Finn and other established business professionals, opening his network to the ready-to-work students at the School of Business only makes sense.

“We know so many people who could be helpful to these students,” says Finn. “It’s rare that I call on someone to mentor a student, and they do not agree.”

A true donor in every sense of the word, Finn fully supports giving financially to the College in multiple ways, such as to the School of Business Dean’s Excellence Fund and including the College of Charleston in his estate plans. His generous support has led to enhancements in technology as well as faculty enrichment opportunities such as research grants. For Finn, however, he feels providing his time and a listening ear to students is how he truly adds value to the student experience.

“It just makes sense,” says Finn. “Life experiences are invaluable for students and that is easy to give.”