“We’re just wild about Harry” was the phrase in the mind and hearts of nearly 300 friends and former students of Harry W. Freeman ’43 in establishing an endowed scholarship upon his retirement from the College in 1990. The sentiment also served as the theme for the gathering – where the new scholarship was announced – to honor his 39 years of service to the College.

“Anyone who was lucky enough to have had Dr. Freeman as a teacher remembers him as a special person, the quintessential professor and one who will be deeply honored if the scholarship drive is successful,” says James Smiley, then-chair of the department of biology.

The drive’s success is indisputable, as nearly $150,000 was raised toward the original $100,000 goal. As a distinguished professor and chair of biology as well as past president of the Alumni Association, it’s only appropriate that Freeman’s scholarship supports both areas.

The scholarship, awarded by the Alumni Association, pays tribute to his unwavering loyalty to the College and is available to relatives of alumni. John C. Duane ’94, son of John P. Duane Jr. ’57 and Ann Wulbern Duane ’60, was selected as the inaugural recipient. After graduating from the College, he attended the University of South Carolina School of Law and was selected as the 2014 Assistant U.S. Attorney of the Year, Charleston Division. He is now senior counsel at Motley Rice LLC. 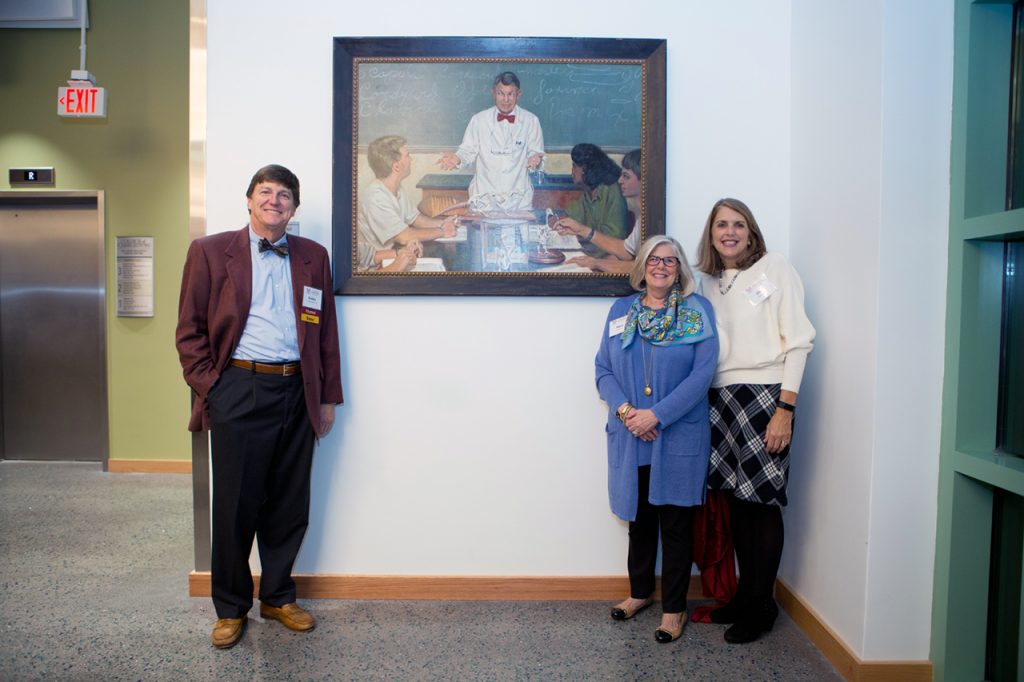 Members of the Freeman family pose with a newly hung portrait of Harry W. Freeman in the Rita Liddy Holings Science Center.

One of the current Freeman Alumni Scholarship recipients is Anna Katherine Baldwin, an early childhood education major and member of the Student Alumni Associates. Baldwin is the daughter of Ann Queensbery Baldwin ’90 and granddaughter of Katherine Liddy Baldwin ’60.

“Anna Katherine is an impressive leader in Teaching Fellows, Teacher Leader and in the elementary education cohort,” says Frances Welch, interim provost and executive vice president for Academic Affairs. “In addition to being an outstanding future teacher with an impressive GPA, she volunteers in numerous service activities such as YALL Fest, ‘College Days’ for Teacher Cadets and bringing students at the Carolina Youth Development Center to campus. Anna’s future students will be inspired by their caring and motivating teacher.”

Freeman’s legacy at the College includes high and demanding standards, a warm and caring manner, and personal interest and involvement in his students’ success. After joining his alma mater in 1960 as professor of biology, he served as head of the department for 18 years. He also was a faculty advisor to premedical and pre-dental students and biology majors for many years.

In addition to deserving students like Duane and Baldwin representing the legacy of Harry Freeman as recipients of the scholarship named for him, the College recently displayed his portrait in the new Rita Liddy Hollings Science Center. Freeman’s portrait hangs very near the portrait of Rita Liddy “Peatsy” Hollings ’57, the center’s namesake, who just so happens to be Anna Katherine Baldwin’s great aunt.