X-ray bursts are highly energetic releases of radiation from the surfaces of neutron stars, triggered by the explosive burning of material accumulated on the surface. It’s the same type of burning that happens in the cores of ordinary stars like the sun, but in this case, happening on the surface. Thus, unlike the sun, where it takes hundreds of thousands of years for this radiation to escape – and in a much weaker form – it happens almost instantly in an X-ray burst. This means that anything surrounding the neutron star is going to get blasted with radiation.

One thing we know for sure surrounds many neutron stars is an accretion disk, a swirling collection of plasma caught in the star’s gravitational field. New X-ray instruments, such as the NICER mission onboard the International Space Station, have given astronomers the tools to study these X-ray bursts and their effects on their environment in detail. 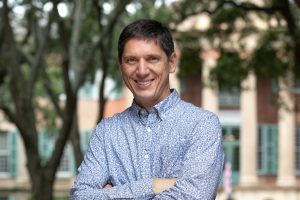 One reason neutron stars are so important to astrophysicists is that they represent the densest state of matter in our universe. Understanding how matter behaves under these conditions is an important step to unlocking the mysteries of subatomic physics and extreme gravity. Understanding neutron stars, though, requires understanding the radiation we receive from them, and that means contributions from the neutron star itself and from the surrounding disk.

That’s where new research by College of Charleston physics and astronomy professor Chris Fragile and his students comes into play. Fragile’s group performed computer simulations studying the interactions of X-ray bursts with accretion disks. As Fragile describes, “Basically, we can model in a computer, with reasonably high fidelity, what is happening in these systems. This allows us to do something like a traditional scientific experiment without the inherent dangers of having a neutron star in our laboratory.”

Multiple simulations of such burst-disk interactions were carried out using resources on the College of Charleston campus and through an XSEDE (Extreme Science and Engineering Discovery Environment) supercomputing allocation. From these simulations many remarkable results were uncovered, most notably, a significant disruption of the inner parts of the accretion disk. Several of the effects revealed in the simulations appear to match observational evidence of disrupted disks seen by X-ray telescopes over the last 15 years.

“I was really excited to see these results,” says Georgia Tech physics professor David Ballantyne, a collaborator on this work. “I’ve been studying these systems for over a decade, trying to understand what the data is telling us about how these disks respond to bursts. The details revealed by these simulations opens a whole new way of studying the physics of accretion disks.”

Seeing the disk being disrupted by the burst and then bouncing back as the burst fades provides a method for studying the internal processes that cause accretion to work.

“I like to say we’re giving the disk a kick and watching what happens,” explains Ballantyne. “Seeing how quickly a disk responds to such a strong impulse allows us to peer into its insides. It’s similar to how scientists use earthquakes to learn about the interior of the Earth.”

Future work should allow Ballantyne to discern what the radiative signatures of these results would be and make predictions for future observations. In this way, the team hopes to be able to reverse-engineer what is happening in real neutron star systems and accretion disks.

Results of this work are published in the Jan. 6, 2020, issue of Nature Astronomy.  Authors include Fragile, Ballantyne and College of Charleston student Aidan Blankenship. The College of Charleston Undergraduate Research and Creative Activities (URCA) Program provide a SURF grant to cover the student research expenses for this project.