Storytelling is a core component of cultures dating back thousands of years with some of the earliest examples found in ancient Egypt.

How fitting, then, that the exotic stories Hesham El Abd shared about his life in Cairo, Egypt, with four of his classmates at Georgetown 40 years ago are reverberating today at the College of Charleston.

The four friends are now two couples – Hilton and Catherine Smith and Jonathan and Nancy Wolf. The friendship they forged at Georgetown remains strong as does their passion for Egypt.

“To find and do and be of significance, you need to study in Cairo,” says Jonathan Wolf. “As a westerner, my first stop out of the U.S. was the ancient world. Cairo opened up what for me later became a career and way of life. It gave me confidence. If you can succeed in another culture with another language, then there’s nothing you can’t accomplish.” 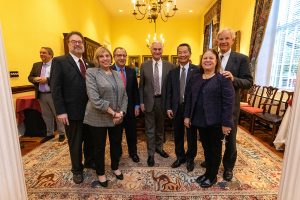 Hilton and Catherine Smith, who serve on the School of Languages, Cultures and World Affairs (LWCA) advisory board, introduced the Wolfs to the College of Charleston. The Wolfs were so taken with the College that, together with the Smiths, they formed a plan to create a student exchange program between the College and the American University in Cairo (AUC). Knowing that AUC President Francis Joseph Ricciardone Jr. would be in Charleston in December, they moved swiftly to make their plan a reality. CofC President Andrew T. Hsu and AUC President Francis Joseph Ricciardone Jr. formalized the exchange program with a signing ceremony on Dec. 13, 2019.

The universities have similarities including their unbridled commitment to the liberal arts, while embracing the 21st century with programs like engineering. They also have deep roots and long histories, which will make the immersion experience for students in the exchange program that much more powerful. Catherine Smith also pointed out that both schools are situated at tributaries – the Ashley and Cooper feed into the Atlantic Ocean while the Nile feeds into the Mediterranean Sea.

“The partnership with the American University in Cairo offers our students a unique opportunity to put global fluency into action,” says LWCA Dean Timothy Johnson. “The plurality of partnerships always accomplishes more than the isolation of the individual. By bringing our two universities together, we are presenting students with the opportunity to expand their horizons and make life-long connections.”

Hilton Smith, who also serves on the College’s Foundation Board, applauded the speed and passion of Johnson and his team.

“Their quick response to this initiative led to the completion of the agreement, which can take years, in just 90 days,” says Smith.

Creating this life-changing experience with his friends made all the difference in the world to Hilton Smith. “I am thrilled to be able to make this possible,” he says. “Helping to change people’s lives for the better is so important.”

Garrett Davidson, assistant professor of Arabic and Muslim World studies at CofC, who attended AUC as an undergraduate and graduate student, concurs.

“This is a fantastic opportunity for both institutions,” says Davidson. “As a student at AUC, I established professional and personal connections that continue today. It was the most influential experience of my life. I explored all over Egypt. I met people from all walks of life and got to hear their views on everything from politics and religion to economics and food.”

For Nancy Wolf, Davidson’s experience confirms the value of the scholarships. “I am proud to make a difference in the world. It’s a great thing.”

And to think it all began with Hesham El Abd sharing stories about Cairo in college.