The Halsey Institute of Contemporary Art at the College of Charleston will present a new exhibit of two modern American artists redefining the folk genre. Inside/Out is an exhibition of works by Butch Anthony and The Raw Materials of Escape is an exhibition of quilts by Coulter Fussell. The pieces will be on view from Jan. 17 to Feb. 29, 2020.

Inside/Out will consist of new images, assemblages and installations created specifically for the Halsey. As a multifaceted, self-taught artist, Anthony creates works that investigate and appropriate images from the American vernacular. Anthony’s work often has a charming immediacy because of the familiarity of the selected materials, yet this surface appeal is often undermined by the conceptual premise. Some images evince a biting sarcasm or ironic wit, while others poke fun at our consumerist society. This is the largest show of Anthony’s work to date. Singular portraits, assemblage objects and installations combine to create a working model of the inside of Anthony’s mind. 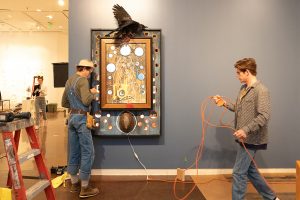 Butch Anthony [left] installing his works at the Halsey. (Photos by Heather Moran)

Mark Sloan, director and chief curator of the Halsey Institute of Contemporary Art, has watched Anthony’s work for over 20 years. He says, “As you will see when you visit the exhibition, his vision is expansive. Though he is directly linked to the natural history of the Alabama farmland where he has spent most of his life, the artist incorporates references to both Darwin and Audubon as exemplars of the gentleman scholar in this realm. There is a reverence for the natural world, but also the evidence of the foibles of human nature. Anthony’s work offers something of a critique on the old musty natural history museums by infusing them with a bit of sideshow flimflam.”

The Raw Materials of Escape will feature quilts and textile works that defy expectations of the medium. Fussell relies on the no-holds barred nature of contemporary painting rules to free her compositions from the constraints of pattern. In turn, she simultaneously relies on the strict discipline of traditional craftwork to act as a self-editing tool.

Katie Hirsch, curator and director of strategic partnerships at the Halsey Institute, says, “Fussell’s work challenges traditional quilting practice in that she creates pieces that are composed like paintings. The interplay between light and dark in her work makes reference to foreground and background while retaining the wholeness traditionally associated with a quilt.” 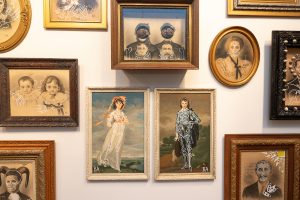 A preview of Butch Anthony’s work.

“Coulter Fussell’s work offers a fusion between painting, quilting and sculpture,” says Sloan. “Working in the time honored tradition of quilting, inherited from her mother Cathy, a nationally recognized quilter, Fussell breaks free of the constrictions of the genre by leaving open the definition of where quilting ends and something else begins. The works are intended to be viewed on the wall, and not on beds, and often include found bits from here and there, including stuffed bears or chickens. Her influences include artists such as Robert Rauchenberg and the Gees Bend quilters of Alabama, among many others. There is a rhythmic, almost musical quality to these works, that celebrates their materiality and history.”

CofC art students are currently hard at work installing the new shows for the opening reception on Friday, Jan. 17, from 6:30-8 p.m.