Alumnus is Leading the Way

Ultimately, he complied with his father’s wishes, but as he drove down St. Philip Street on his way to The Citadel, he saw the CofC campus. He pulled over and asked a guy how he liked it. His reply of “awesome,” together with the beauty of the campus, cinched it for him. 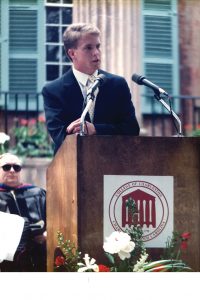 Swarat got a roll of quarters – he knew it would be a long call – and drove to a pay phone at a nearby gas station to break the news to his father. “My first trip home was tough,” he admits.

The Myrtle Beach native started out as a less-than-enthusiastic pre-med student but a very passionate member of the Sigma Alpha Epsilon (SAE) fraternity. As he worked his way through school delivering pizzas, busing tables and washing dishes, he also made time to contribute to SAE.

“He was very popular,” recalls fellow SAE and classmate Athan Fokas ’89. “He was competitive, always taking care of business, but also a lot of fun to be around. He would always recruit people to get things done.”

His can-do spirit led to his SAE brothers convincing him to run for student body president. Swarat won, and that’s when things got interesting. As student body president, Swarat began to spend a lot of time with then-President Harry M. Lightsey. “He was a fascinating character,” says Swarat. “I don’t think I’ve ever interacted with anyone as intelligent as Dr. Lightsey.”

Lightsey challenged Swarat. One night, for example, he took Swarat to a dinner with the Board of Trustees.

“As we were walking in, he looked back at me and said, ‘You are my keynote speaker tonight. Figure out what to say, and I’ll call upon you at dessert,’” remembers Swarat, who scrambled to put together past speeches he had made on campus. “I managed to muddle through it. Afterwards Mrs. Lightsey said that he must think highly of me because he did that with all his children – put them on the spot to see how they would react.”

Under Lightsey’s guidance, Swarat began developing his natural leadership skills. His role as student body president required a lot of negotiation, strategy and research – all qualities needed by a lawyer.

Swarat wanted to go to law school after graduation. His mentor, who was the dean at UofSC Law School before becoming president of CofC in 1986, offered to assist, but Swarat declined. “I guess there was a certain amount of stubbornness involved,” he says. “I didn’t want to call in favors. I wanted to get in on my own merit.”

His own merit got him on the wait list, so he took a position with the state court system. While he found the work to be hard and rewarding, Swarat realized Lightsey was correct; law school was the right direction for him and he needed help to make that happen, so he called his mentor. 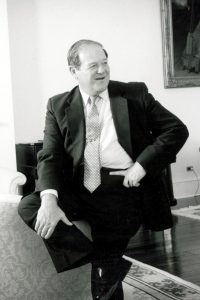 “Dr. Lightsey took me around to meet everyone on the admissions committee,” says Swarat. “Without those introductions, I may not have gotten accepted.”

Swarat graduated from UofSC Law School and went on to a rewarding legal career, serving as a prosecutor and judge. He currently is in private practice in Columbia handling civil litigation and criminal defense. Throughout his career, he remembered his alma mater, serving as a mentor for SAE students interested in future careers in law.

“It wasn’t until Tav became a member of the College’s Board of Trustees that I realized how much Dr. Lightsey’s intellectual and leadership skills have influenced his life and his successful legal career,” says Betty Craig, who served as President Lightsey’s secretary and is currently executive assistant for the Board of Trustees. “If Dr. Lightsey were here today, I know he would stand proud that he played such an important role in Tav’s professional life.”

On February 12, 2018, Governor Henry McMaster appointed Swarat to serve on the Board of Trustees, something that made absolute sense to Fokas. “Tav is an all-around great guy,” he says. “He’s on point and does what he says he’s going to do. He’s good with the community, well connected and good at raising money. He is a great asset.”

In 2014, Swarat started a scholarship fund to help other students the way his mentor helped him. “The fund gives talented student leaders the opportunity to broaden their horizons,” explains Swarat. “I want them to have the chance to enrich their abilities through leadership training, study abroad, exposure to other leaders – whatever they think will help enhance their CofC experience.”

As the College enters its 250th anniversary, Swarat is adding a zero to his scholarship pledge to make it $250,000, and he is encouraging the College community to give what they can, be it $25 or $25 million.

“I know I’m making a wise investment because these motivated people will return and give back to the College,” adds Swarat, who hopes to assist some of the scholarship recipients with finding mentors. “There’s a Greek proverb that says ‘Society grows great when old men plant trees whose shade they know they shall never sit in.’”
Although not all that old, Swarat is planting some significant trees.