Bus Restoration Is A Clutch Save

R. Grant Gilmore III, director of the Historic Preservation and Community Planning (HPCP) Program at the College, was at a conference in Washington, D.C., when a black-and-white photograph caught his eye. The image, taken in 1964 by award-winning civil rights documentarian Leonard Freed, depicts three men standing in front of a VW bus. The motto “Love Is Progress/Hate Is Expensive” is painted on the back. Gilmore leaned closer and was surprised to learn that the photo was taken on Johns Island, S.C. His first thought was, Wouldn’t it be great if we could find that bus?

This fortuitous moment in D.C. launched a series of events that ultimately led Gilmore and his colleague, Barry Stiefel, along with several HPCP students, to the Jenkins family farm on Johns Island and the historic bus. Their goal was to save the van before it was lost forever. 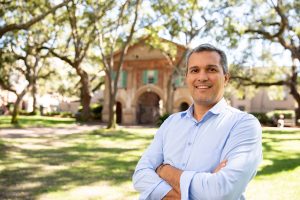 historic preservation program in the U.S. that works on vehicles as well as buildings.”

Born in 1910 and raised on Johns Island, Esau Jenkins believed in the power of education and the freedom to vote. A respected member of his community, he volunteered his time to drive children from Johns Island to school in Charleston in his VW bus. Eventually, he was able to purchase several school buses to transport people to work in the city. Jenkins said they could pay him back by registering to vote. In 1948, Jenkins founded the Progressive Club, a community gathering place that became the site of South Carolina’s first Citizenship School, an important training ground for civil rights organizers, adult literacy and voter education. When Martin Luther King Jr. came to speak in 1962 at Emanuel AME Church, Jenkins shared the podium with him.

The 1966 Volkswagen Type 2 Deluxe Station Wagon (Microbus) was in poor condition when Gilmore and his team arrived on Johns Island. It had been sitting in the backyard, exposed to the elements for more than 40 years, but Gilmore and his students believed in its historic value and began to research and explore conservation options.

“I was involved in the entire process, from the first time we visited the bus, to brainstorming ways to save the bus and interviewing Bill Jenkins about what the bus meant to his mother and father,” says Trent Humphrey ’19. “I found the research eye-opening because it was a topic from a different culture, which made me recognize preconceived notions and biases that I had.” 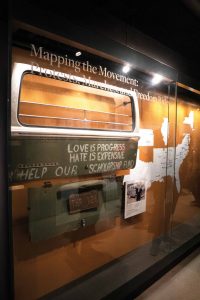 In March 2019, a Historic Vehicle Association (HVA) team traveled to Johns Island to excavate the bus so it could be stabilized and documented for the National Historic Vehicle Register. [Click here to see a time-lapse of the excavation.] The bus was then transported to the HVA national laboratory in Allentown, Pa., where it underwent extensive conservation efforts for more than five months. The bus was unveiled to the public in grand style during the fifth annual “Cars at the Capital” on the National Mall in Washington, D.C., last September. It was a remarkable recovery.

The Jenkins family bus will return to the Lowcountry later this year, and Gilmore is in discussions with Charleston’s International African American Museum about providing a permanent home for the historic vehicle.

What could be a more fitting spot?